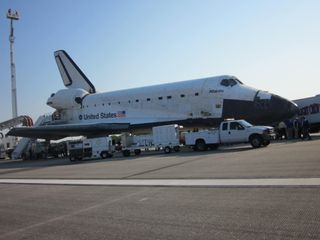 CAPE CANAVERAL, Fla. — NASA's last shuttle landing today (July 21) was an occasion for celebration and reflection, officials said. But soon it will be time to look to the future.

Though the U.S. space agency is now without its own means of transporting people to space, it does have some plans in the works.

"Don't be misled into thinking we have left human spaceflight," NASA chief Charlie Bolden told reporters today while standing next to the newly returned shuttle Atlantis. "The future is today."

Atlantis landed this morning here at Kennedy Space Center, capping off a 13-day mission to the International Space Station that was the 135th and final shuttle mission ever. [Photos: NASA's Last Space Shuttle Landing in History]

The end of the shuttle program will be an adjustment, officials said, but will ultimately enable NASA to direct its resources toward building a new spaceship and rocket to take people beyond low-Earth orbit to an asteroid and Mars.

"I recognize that change is very hard," Bill Gerstenmaier, NASA's associate administrator for space operations, said in a briefing after landing today. "But huge growth or huge improvement really comes from change."

NASA has decided to build a so-called Multi-Purpose Crew Vehicle for deep space exploration based on the Orion capsule, which was initially developed for moon-bound trips under the now-cancelled Constellation program.

The agency is still mulling potential designs for a huge, heavy-lift rocket to carry the crew vehicle. The decision for that rocket is expected to be unveiled later this summer.

Meanwhile, NASA will rent seats for U.S. astronauts aboard Russian Soyuz spacecraft to go to the International Space Station, which will continue operating until at least 2020. Those tickets will go for $63 million a seat.

Soon, the agency hopes commercial American spaceships will be ready to take over the job.

"NASA I think has really laid the foundation for commercial spaceflight to take off," Atlantis' commander Chris Ferguson said during a press conference after landing. "I think we're going to have people perhaps spending long periods of time in orbit who have paid for a trip there."

Though the gap in U.S. spaceflight ability is unfortunate, it's not a first, NASA officials have pointed out. The first space shuttle launched in 1981, six years after the last Apollo flight.

Gerstenmaier said that the first private unmanned U.S. spacecraft could deliver cargo to the International Space Station by the end of this year. And NASA's Commercial Crew Development program aims to spur commercial companies to be ready to carry people on private spacecraft by 2014 or 2015. That would represent only a three or four year gap in U.S. spaceflight capability — a shorter margin than the one between Apollo and shuttle.

During the gap, NASA will also rely on robotic spaceships from Russia, Japan and Europe to keep the space station stocked up.