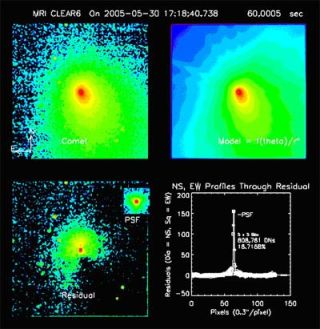 Comet Tempel 1’s nucleus appears as the red blotch at the center of these false-color views based on Deep Impact observations from May 30, 2005. The actual image is on the upper left with a mathematical model Tempel 1’s atmosphere to right. The lower left image shows the difference between the two upper views, yielding Tempel 1’w nucleus. At bottom right, a trace through the center of the comet shows the brightness of the nucleus.
(Image: © University of Maryland/NASA/Ball Aerospace.)

NASAscientists want to learn all they can about comet Tempel 1 before they drive astake into its heart. Today they improved their view with the first image ofthe comet's nucleus.

When Deep Impact releases a probe toslam into Tempel 1 on July 3-4, scientists will photograph the event in aneffort to pin down the comet's structure and composition. The more they canlearn in advance, the more they'll glean from the explosive event, which may bevisibleto the naked eye from Earth.

The heartof a comet is made of ice and rock. Around that, gas and dust that boil offcreate a dense halo that obscures the solid surface, called the nucleus.

Imagestaken in May by Deep Impact have been processed to reveal the nucleus,according to a NASA statement released today. The atmosphere has beensubtracted from the image to reveal the core.

The nucleusis not a sphere. Rather, its about 9 miles (14 kilometers) long and 3 miles (4.8kilometers) wide. The latest image was taken when the spacecraft was about 20million miles (32 million kilometers) from Tempel 1.

"Being ableto distinguish the nucleus in these images helps us to better understand therotational axis of the comet's nucleus, which is helpful for targeting thiselongated body," said University of Maryland astronomer Michael A'Hearn, wholeads the mission.

"Wedetected the nucleus a lot sooner than expected, but now we'll be watching thenucleus all the way to impact," said Carey Lisse, a member of the Deep Impactteam and leader of the effort to extract views, of the nucleus from thespacecraft images.

Thebrightness of the nucleus as determined from these images was close to thatpredicted from earlierobservations with the Hubble and Spitzer space telescopes and observationsfrom large telescopes on the ground, the scientists said.

"Theearly detection of the nucleus in these images helps us to set the finalexposure times for our encounter observations," said Michael Belton,deputy principal investigator for the Deep Impact Mission. "Next we needto determine, using additional nucleus detections, how the comet is rotating inspace, so we can figure out what part we will hit on July 4th."

Deep Impactconsists of a flyby mothership the size of a subcompact car and a five-sidedimpactor spacecraft about the size of a washing machine.

Thespacecraft will approach the comet and collect images and spectra of it. Then,some 24 hours before the 2 a.m. (EDT) July 4th impact, the flyby spacecraftwill launch the impactor into the path of the onrushing comet. Like a copperpenny pitched up into the air just in front of a speeding tractor-trailertruck, the 820-pound impactor will be run down by the comet, colliding with thenucleus at an impact speed of some 23,000 miles per hour.

Scientistsexpect the image to create a crater several hundred feet in size, ejecting ice,dust and gas from the crater and revealing pristine material beneath. The eventwill be imaged and analyzed by the mothership and several other ground- andspace-based observatories.