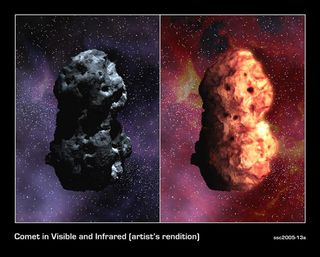 An artist's rendition of the Comet Tempel 1 in both visible and infrared light. A true, detailed image of the comet will have to wait until Deep Impact rendezvous with it on July 3-4.
(Image: © NASA/JPL/Caltech/Tim Pyle)

To hit a dark object traveling thousands of miles per hour in the void of space, it helps to know exactly how big your target is.

The Deep Impact mission got this information from recent observations of the Comet Tempel 1, into which NASA plans to drive a special projectile in early July. The new data, from the Hubble and Spitzer space telescopes, has been combined to produce a new artist's rendering of the comet.

"Even tiny adjustments to our model of Tempel 1 are crucial to hitting the target and setting camera exposure times," said Carey Lisse of Johns Hopkins University.

Launched on Jan. 12, 2005, the Deep Impact spacecraft carries an 820-pound impactor that will be placed in the path of Tempel 1, as it barrels in at 23,000 mph. The collision is planned for the wee hours of July 4th (U.S. East Coast time) with the mothership flying next to the comet to document the fireworks. The impact, expected to create a glow visible through binoculars from Earth, will occur late on July 3 on the U.S. West Coast.

From the comet's impact and crater, scientists hope to learn what these dirty snowballs are made of - and by extension what our solar system looked like billions of years ago before the planets formed.

Previous ground-based telescopes have observed Tempel 1 to be dark, oblong and just a few miles wide. The Deep Impact spacecraft itself has also taken pictures of the comet during its approach.

But to get a more accurate sense of the speeding comet's properties, astronomers used their big eyes in the sky: Hubble and Spitzer.

The visible light from Tempel 1 is predominantly due to reflected sunlight. This can mask the true proportions of the comet, since a small shiny object will appear as bright as a large dingy one. For this reason, the Spitzer infrared image was invaluable for refining the size estimate, since this light comes from the comet's own warm glow, as opposed to reflection.

"Spitzer was crucial in pinning down the comet's size, and the combination of Spitzer and Hubble was vital to learning its reflectivity and rotation rate," said Michael A'Hearn of the University of Maryland, who is the principal investigator for Deep Impact. "We'll know exactly what it looks like when we get there."

The researchers now estimate that Tempel 1 is about 8.7 by 2.5 miles, or roughly one-half the size of Manhattan. Using space and ground measurements, astronomers have also derived that the comet rotates about once every two days.

With the size known, the comet's surface can be described as a black matte finish that reflects just four percent of the sunlight that falls on it.

"Knowing the reflectivity also tells us how to set up our cameras," Lisse said. "Like photographers, it's important for us to know our subject before the shoot."