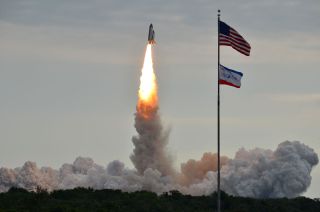 Astronauts have been working in space during holidays since the dawn of human spaceflight and this year is no exception. This Fourth of July finds six people living in orbit on the International Space Station while NASA's last space shuttle crew heads to the launch site for a planned July 8 blastoff.

The four shuttle astronauts, commanded by veteran spaceflyer Chris Ferguson, will launch into space Friday on the Atlantis orbiter to NASA's final shuttle mission before the iconic 30-year program is retired for good. Atlantis will fly a 12-day mission to the space station to deliver supplies and spare parts.

With four more days until Atlantis makes its historic final flight, where's a look at four holiday shuttleflights for the Fourth of July:

Complete with the rocket's red glare, STS-121 Discovery in 2006 was the first flight to launch on the Fourth of July. Weather concerns delayed the launch twice, first on July 1, then to July 2. Finally, a successful launch was achieved on America's Independence Day. [Best Space Fireworks Photos Ever]

After a week of being in space, STS-4 landed on Earth on the Fourth of July. This mission marked a great milestone for the space shuttle program, as it was the final flight that was dedicated to only performing tests on the Space Shuttle Columbia itself. The next mission would be the first to deploy commercial satellites.

3. Have a holly, jolly (space) Christmas

The only space shuttle astroanuts to spend Christmas in space were the crew of NASA's STS-103 mission in 1999, which launched on Dec. 19 and returned Dec. 27. Space Shuttle Discovery spent eight days in orbit on a mission to repair the Hubble Space Telescope. Two teams of space walkers spent more than three days in spacewalks fixing equipment on Hubble, finally returning it operation by Christmas Day. They celebrated by donning Santa Claus hats.

On Memorial Day weekend in 2011, the STS-134 crew on Endeavour was performing the final tasks of its 14-day mission to deliver $2 billion worth of astrophysics experiment and other supplies to the International Space Station. This was Endeavour's final flight after 19 years of service in the space shuttle program. The crew even sent out a Memorial Day message to family and fans back home.

NASA is retiring the soace shuttle program to make way for a new one aimed at deep space exploration of asteroids and Mars. Of the agency's three flying shuttles, the Discovery and Endeavour orbiters already flew their final missions earlier this year. After Atlantis' last voyage, the shuttles will be retired to museums for public display.