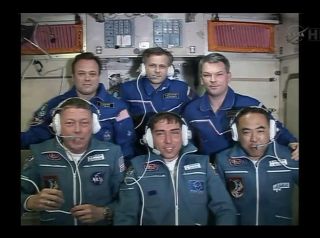 Like many Americans, the NASA astronauts aboard the International Space Station will enjoy a long weekend to mark the Fourth of July holiday — though they won't be celebrating with any fireworks inside the orbiting lab.

All six station crewmembers — two Americans, three Russians and a Japanese spaceflyer — will get Saturday, Sunday and Monday off in honor of the U.S. Independence Day holiday, NASA officials said. They'll be able to kick back a bit and, quite literally, watch the world go by.

The crew should appreciate the chance to recharge their batteries, because busy times are just around the corner. The space shuttle Atlantis launches toward the station next Friday (July 8) on its STS-135 mission, the final flight of NASA's iconic shuttle program.

"With only four shuttle crewmembers, it's going to be shorthanded as they're working through everything, particularly on the transfers," NASA spokesman Kelly Humphries told SPACE.com. "So they're going to have a really busy mission."

The space station crew won't simply laze around all weekend, however. There are always some housekeeping duties to take care of. And the spaceflyers may do some voluntary science work or begin preparing for Atlantis' arrival on their own time, Humphries said.

When Monday rolls around, the two Americans (Ron Garan and Mike Fossum) won't join their Earthbound countrymen in lighting up Roman candles or sparklers. Open flames are forbidden inside the station's main cabin, for obvious safety reasons. [Best Space Fireworks Photos Ever]

And while astronauts can see some of Earth's features — such as the Great Wall of China and Egypt's pyramids — from their 220-mile (354-kilometer) orbital perch, they won't be able to spot the many July 4 fireworks displays lighting up night skies around the country.

Humphries added that he wasn't aware of any special activities planned for July 4, though Garan and Fossum might decide to mark the holiday in some way. Meanwhile, the four astronauts who will fly on NASA's last shuttle mission will spend their Fourth of July flying to their Florida launch site at the Kennedy Space Center.

The station astronauts' international counterparts might not be as motivated to celebrate America's Independence Day, but it only makes sense to give all station crewmembers the same days off, officials have said.