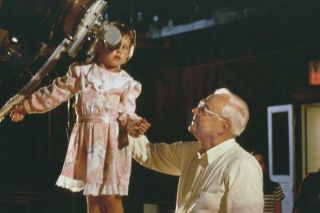 Frank Drake with a young observer at the Lick Observatory.
(Image: © SETI Institute)

SANTA CLARA, Calif. – Fifty years ago, humanity conducted the first scientific experiment to search for evidence of alien life in the universe .

Astronomer Frank Drake, the man behind that project, received top honors at a banquet gala Saturday at the SETIcon convention here about the search for extraterrestrial intelligence. It is not only the 50th anniversary of that first experiment, called Project Ozma, but also Drake's 80th birthday.

In 1960, Drake, then an astronomer at Cornell University, decided to mount a search for a signal being sent to us from another solar system. He pointed a radio telescope at the National Radio Astronomy Observatory in Green Bank, W. Va., toward two nearby sun-like stars, Tau Ceti and Epsilon Eridani, which seemed like good bets for hosting habitable planets, and possibly life. He observed them for 150 hours over four months.

Though the experiment did not succeed in discovering any of our cosmic neighbors, it began the search that is still going strong today. Drake and others at the SETI Institute in Mountain View, Calif., believe that one day the search will prove fruitful.

"We are fully aware of the great importance of our enterprise," Drake said. "That discovery will be one of the most important to occur for any civilization."

One year after Project Ozma, Drake formulated an equation that would fundamentally shape the way scientists think about life beyond Earth. The Drake equation, named after its creator, is the "second-most famous equation" after Einstein's E = mc^2, Shostak said.

This formula calculates how many intelligent extraterrestrial civilizations are likely to exist in the Milky Way, based on a number of factors. The equation takes into account the rate of star formation in the galaxy, the fraction of stars that have planets, the fraction of planets that are habitable, the percent of those that actually develop life, the percent of those that develop intelligent life, the fraction of civilizations that have a technology that can broadcast their presence into space, and the length of time those signals would be broadcasted.

"The Drake equation is in effect a textbook for astrobiology," said David Morrison, director of the Carl Sagan Center for the Study of Life in the Universe at the SETI Institute. "He has given us the first great example of the synthesis of astronomy and biology."

Drake is still active in SETI, participating in optical and radio searches for signs of life. [10 Alien Encounters Debunked]

"Frank is not only a pioneer but he continues to bubble up new ideas for SETI," Shostak said.

If and when humanity does discover a signal from aliens, it will transform our society, Drake said.

"All of history has been just prologue," he said. "There is a new history about to come to us."