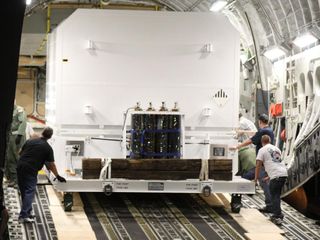 NASA's next Mars rover to explore the Red Planet landed in Florida yesterday (June 22) after a cross-country flight, marking a key milestone on the road to its planned launch this fall.

The Mars Science Laboratory (MSL) rover, also known as Curiosity, arrived at NASA's Kennedy Space Center aboard an Air Force C-17 transport plane. Also making the trip was the novel rocket-powered descent stage that will fly the rover during the final moments before landing on Mars, NASA officials said.

The C-17 took off from March Air Reserve Base in Riverside, Calif. The rover and the descent stage had been trucked there from NASA's Jet Propulsion Laboratory (JPL) in nearby Pasadena. JPL is managing the $2.5 billion MSL mission.

The rover's aeroshell and cruise stage — which will protect the rover and guide it, respectively, during the nine-month journey to the Red Planet — arrived at Kennedy last month. The MSL mission is slated to launch from Cape Canaveral Air Force Station between Nov. 25 and Dec. 18, and the car-size rover should touch down on Mars in August 2012. [Video: Curiosity to Make Unusual Landing on Mars]

"The design and building part of the mission is nearly behind us now," said JPL's David Gruel, manager of MSL assembly, test and launch operations. "We're getting to final checkouts before sending the rover on its way to Mars."

The rover and other spacecraft components will undergo more testing in Florida before mission staff stack them and fuel the onboard propulsion systems.

Curiosity should be enclosed in its aeroshell for the final time in September and delivered to Kennedy's Launch Complex 41 in early November for integration with a United Launch Alliance Atlas V rocket, NASA officials said.

Curiosity is about twice as long and more than five times as heavy as any previous Mars rover. Its 10 science instruments include two for ingesting and analyzing samples of powdered rock delivered by the
rover's robotic arm.

During a prime mission lasting one Martian year (nearly two Earth years), researchers will use the rover's tools to study whether Curiosity's landing region is, or ever was, capable of supporting microbial life. Mission planners have narrowed the possible landing sites to four choices and are expected to select one soon.