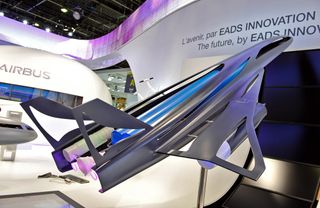 A model of the EADS Zero Emission Hypersonic Transportation, or ZHEST, passenger plane concept is shown at the 2011 Paris Air Show on June 20, 2011.
(Image: © EADS)

If you're hoping to reserve a seat aboard a proposed new hypersonic airliner's maiden voyage in 2050, you'd better start saving up now.

Tickets for a trip in the superfast jet, known as ZEHST (for Zero Emission Hypersonic Transportation), will likely cost in the neighborhood of $10,000 to $30,000 in today's dollars, according to aerospace industry experts. That hefty price tag will keep most regular folks out of the skies — a fact that perhaps doesn't bode well for ZEHST's long-term survival.

"This kind of thing would be limited to the rich business class, most likely," said Ajay Kothari, president and CEO of the aerospace engineering firm Astrox Corporation. "At least at this point in time, it's hard to make a business case" for the vehicle, he added.

L.A. to Tokyo in less than three hours

Aerospace giant EADS, which owns aircraft manufacturer Airbus, introduced the idea for ZEHST over the weekend at the Paris Air Show. The concept vehicle would be capable of flying at about four times the speed of sound, or Mach 4.

At these speeds — about twice as fast as the supersonic Concorde jets that plied the skies from 1976 until 2003 — passengers could zip from Los Angeles to Tokyo in just 2 1/2 hours.

ZEHST, which would likely seat between 50 and 100 passengers, relies on a three-part propulsion system. The jet would take off horizontally like a plane, using turbojets to climb to about 10,000 feet (3,048 meters). At that point, rockets ignite, blasting the craft steeply upward.

ZEHST would be fueled principally by hydrogen, which would make the vehicle more environmentally friendly than the hydrocarbon-burning jets of today. EADS officials said they envision having a ZEHST demonstrator vehicle ready to go by 2020, with commercial service starting around 2050.

Exactly how much a seat on a ZEHST flight might cost is unknown; it's tough to project such things 40 years into the future, after all. But suffice it to say that tickets won't be cheap.

"In some articles, EADS says the goal is to have ticket prices in the order of magnitude of Concorde (more or less $10,000 for a Paris-New York return ticket)," Sebastien Defoort, of the French aerospace research institute ONERA, told SPACE.com in an email interview. ONERA is involved in the ZEHST project, Defoort added.

"And the cost of a ticket would not go down as the market improves, because the cost of fuel would still be the same," Kothari told SPACE.com. "There is nothing you can do. It just requires four to five times more fuel per mile than a subsonic plane would."

Kothari also estimated that it would cost EADS about $10 billion to develop a working ZEHST aircraft.

While some concept vehicles suffer from an overabundance of enthusiasm and imagination in their designers, the EADS-led team appears to have its feet planted firmly on the ground. ZEHST looks eminently doable in its stated timeframe, experts said, with no big breakthroughs needed.

"From the technological point of view, there is no reason why the concept should not be feasible," Defoort said.

Kothari agreed, saying that he thinks ZEHST would likely be capable of flying passengers much sooner than 2050, perhaps by 2030 or so. In fact, he's puzzled as to why EADS would shoot for such a far-off date to commence commercial operations.

Four decades from now, Kothari said, vehicles more advanced and capable than ZEHST will likely be flying. Reusable spaceships, for example, may be ferrying tourists to Earth orbit and back by 2030 for around $250,000 per seat, provided enough funding can be procured to develop them, he said. [10 Fantasy Spaceships Headed for Reality]

So Kothari wonders why EADS is aiming so low with ZEHST, perhaps positioning itself to miss out on a potential space tourism boom.

"They might be being conservative here," he said. "It's possible that they want to be conservative, and show that phase first before they start talking about something which is a Mach 6 or Mach 8 scramjet airplane, or something that goes to orbit for space tourism."

Still, Kothari is happy that a big name in aerospace such as EADS is bringing the discussion of hypersonic aircraft into the mainstream.

"I don't want to discourage them," he said. "Any thinking of this type, or any advancement of this type, is a positive step for the future."