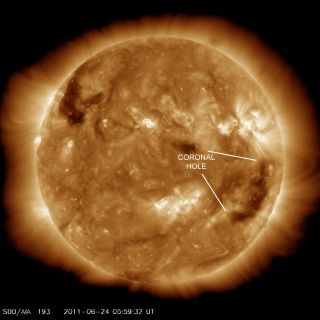 Earth is inside a solar wind stream flowing from the indicated coronal hole. This image, taken on June 24, 2011, comes from the Solar Dynamic Observatory in 193 angstrom
(Image: © NASA/SDO/AIA)

From an intense solstice solar storm to new views of a huge asteroid and preparations for NASA's final shuttle flight, it was a busy week in space.

Choose your favorite space story from these 12 top picks of the last week here on SPACE.com.

Pluto may only be a dwarf planet, but it has more moons than Earth.

On Tuesday, June 21, the sun unleashed a strong solar storm just in time for the Earth solstice, which marked the start of summer in the Northern Hemisphere and winter in the south.

The storm included a moderate C7-class solar flare kicked off the solar storm and triggered a massive eruption of plasma, known as a coronal mass ejection. [Read More]

After 15 years as a NASA astronaut, veteran shuttle commander Mark Kelly announced plans to hang up his spacesuit to spend time with his wife, Arizona Congresswoman Gabrielle Giffords, who was shot in the head during a January attack.

Kelly commanded NASA's final flight of the space shuttle Endeavour in May 2011 will leave NASA, and the Navy (where he holds the rank of Captain), effective Oct. 1. He also has an identical twin, Scott Kelly, who is also a Navy captain and astronaut. [Read More]

Natural moon bridges are only some of the amazing discoveries NASA's Lunar Reconnaissance Orbiter has turned up in the two years it has been orbiting the moon.

Last week, NASA declared the exploration phase of the spacecraft's mission complete, with a focus ahead on pure moon science. [Read More]

Under the Saturn Moon's Sea?

Using NASA's Cassini spacecraft orbiting Saturn, scientists have discovered that the water geysers erupting from Enceladus contain a significant amount of salt — enough to suggest the presence of a subterranean sea.

The finding might have implications for the possibility of life on Enceladus, researchers said. [Read More]

If you're hoping to reserve a seat aboard a proposed new hypersonic airliner's maiden voyage in 2050, you'd better start saving up now.

Tickets for a trip in the superfast jet, known as ZEHST (for Zero Emission Hypersonic Transportation), will likely cost in the neighborhood of $10,000 to $30,000 in today's dollars, according to aerospace industry experts. That hefty price tag will keep most regular folks out of the skies — a fact that perhaps doesn't bode well for ZEHST's long-term survival. [Read More]

On June 24, 1947, an amateur pilot named Kenneth Arnold was flying a small plane near Mount Rainier in Washington state when he saw something extraordinarily strange. Directly to his left, about 20 to 25 miles north of him and at the same altitude, a chain of nine objects shot across the sky, glinting in the sun as they traveled.

When the objects faded into the distance, Arnold flew to Yakima, Wash., landed and immediately told the airport staff of the unidentified flying objects he had spotted. The next day, he was interviewed by reporters, and the story spread like wildfire across the nation. [Read More]

A NASA spacecraft is right on target for its year-long orbital encounter with the huge asteroid Vesta, which is set to begin next month.

NASA's Dawn probe is now just 96,000 miles (155,000 kilometers) from Vesta, the second-largest object in the main asteroid belt between Mars and Jupiter, NASA officials announced today (June 23). The spacecraft should enter into orbit around the 330-mile-wide (530 km) space rock on July 16. [Read More]

Earth and the other rocky planets aren't made out of the solar system's original starting material, two new studies reveal.

Scientists examined solar particles snagged in space by NASA's Genesis probe, whose return capsule crash-landed on Earth in 2004. These salvaged samples show that the sun's basic building blocks differ significantly from those of Earth, the moon and other denizens of the inner solar system, researchers said. [Read More