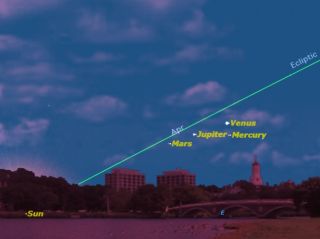 Four bright planets, with Mercury at greatest elongation, as seen from Boston, Mass., on the morning of May 7, 2011 before sunrise. Venus, Jupiter and Mars will also be visible.
(Image: © Starry Night Software)

Last week, six planets and the crescent moon formed a line of glowing objects in the predawn sky. This week Mercury takes the spotlight as it reaches maximum elongation from the sun with Venus, Mars and Jupiter close by.

This grouping of planets will look very different depending on the location from which you view them. They will be best seen from the Southern Hemisphere because at this time of year the ecliptic, the line in the sky along which the sun travels, is almost vertical, placing the dawn planets high above the horizon as shown in this sky map of Mercury and its companions.

The same group of planets, viewed a few hours earlier from Boston, appears to lie much closer to the horizon, because in the Northern Hemisphere the spring morning ecliptic lies low and close to the horizon. This sky map of the four planets shows their low-lying configuration as viewed from Boston.

How to see the four planets

The best morning to see these four planets at the same time is on Saturday, May 7, though the mornings before and after should be almost as good. You will need a low, cloudless eastern horizon.

First to rise will be Venus, about an hour before sunrise -- check your local paper for local sunrise time.

Venus will be joined by Jupiter about 5 to 10 minutes later. Jupiter will appear about 4 degrees (half a binocular field) to Venus' left. Your fist held out at arm's length covers about 10 degrees of the night sky.

A few minutes after Jupiter's appearance, Mercury will rise directly below Venus. About 5 minutes after that, Mars will join the other three. The Red Planet will appear another half binocular field to the left of Jupiter. [Skywatching Tips: Viewing Planets in 2011]

Mercury and Mars will be much fainter than Venus and Jupiter, and therefore much harder to see.

Although it's possible to see all four with the naked eye if you know their exact location, spotting them will be much easier with a set of 7x50 or 10x50 binoculars. [Astrophotography Telescopes for Beginners]

If you continue to follow these four planets just before dawn for the next week, you will see them shift positions quite strikingly from one morning to the next.

Jupiter and Venus will close in on each other, being closest on the morning of Wednesday, May 11. On this morning they will point to Mercury below them.

If you snap an amazing photo of the planetary grouping of Mercury, Venus, Jupiter and Mars and would like to share it with SPACE.com for a possible story or image gallery, please contact managing editor Tariq Malik at: tmalik[at]space.com.