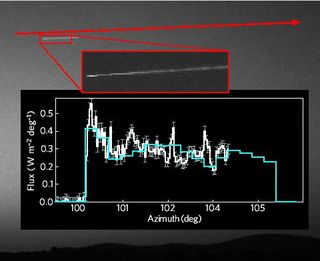 The background image shows the meteor near the top-left and the horizon at the bottom. A red arrow shows the direction of travel. The inset is a larger version of the meteor itself. The graph is a "light curve" that aided in tying the meteor to comet Wiseman–Skiff.
(Image: © Nature/NASA/Spirit/F. Selsis et al.)

NASA's Spirit rover photographed a streak of light that was likely part of a martian meteor shower, scientists announced today.

The picture is the first of a shooting star above Mars. Further, the flash has been traced back to its parent comet. And now astronomers figure they should be able to forecast martian meteor showers.

Meteor showers on Earth are typically caused by streams of debris that boils off comets when they pass through the inner solar system on their orbits around the Sun. The bits, from the size of sand grains to peas, vaporize as they plunge through the atmosphere.

Skywatchers on Earth are sometimes dazzled by the annual displays of the winter Leonid meteor shower and the summer Perseids, among others.

Similar meteor showers ought to occur on Mars, even though the red planet has a very thin atmosphere compared to Earth.

On March 7, 2004, Spirit's panoramic camera photographed a bright streak in the sky. Scientists released the image a few days later, but at the time they were not sure if it was a meteor or the Viking Orbiter 2, still circling Mars after its 1970s mission.

Now the scientists have analyzed the path of the object and considered meteor showers that were predicted to have occurred on Mars around that time.

The meteor was likely once a tiny chunk of a comet called Wiseman-Skiff, according to a team led by Franck Selsis of Centre de Recherche Astronomique de Lyon in France.

The analysis is presented in the June 2 issue of the journal Nature.

The result is somewhat speculative, but no other known comet debris stream (or spacecraft) fits the data.

Because of perspective, all meteors from a comet seem to emerge from a single point in the sky, called the radiant, Selsis explained. "On Earth for instance, Leonids emerge from the constellation Leo and the Perseids from Perseus."

So the researchers checked to see if the streak was aligned with the theoretical radiant of comet Wiseman-Skiff.

The shooting star was low in the sky and ran across the horizon, creating a relatively long spectacle. If you were on Mars and held a fist at arm's length, resting it on the horizon, the meteor would have soared barely above your fist. In astronomers' terms, it was 14.2 degrees off the horizon.

If you could trace the meteor back and below the horizon, it would have appeared to emanate from the constellation Cepheus, and so the scientists have dubbed the apparent meteor shower the Cepheids.

Other researchers have catalogued debris streams from various comets. The streams are made up of many strands, each representing previous passages of the comet. A meteor shower in any given year can vary in intensity depending on the density of the portion of the stream a planet passes through that year. All this knowledge allows astronomers to roughly predict the intensity of future showers.

Avid meteor watchers might want to begin planning a trip to Mars for 2007.

"Our findings indicate that martian meteor showers may now be predictable events," Selsis said. "Detailed simulations show that we can expect an intense Cepheid shower on Mars, on Dec. 20, 2007."

The word meteor is applied to any object that streaks through a planet's atmosphere. If one reaches the ground, it is called a meteorite. Earlier this year, Spirits twin rover, Opportunity, stumbled upon a basketball-sized rock that turned out to be the first known Mars meteorite.

Ancient asteroid impacts have also carved chunks of rock from Mars, launching them into space. Some of these have arrived at Earth millions of years later, becoming meteors and, in some cases, meteorites. Scientists study these rocks from Mars for clues about the history of the red planet.