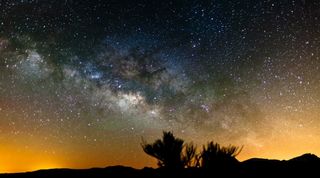 A still from a time-lapse video made by photographer Terje Sorgjerd of the night sky as seen from the Canary Islands.
(Image: © Terje Sorgjerd (www.tesophotography.com))

Have you ever wondered what it's like to sit atop a volcanic peak in the Canary Islands, gazing up at the brilliant stars of the Milky Way as a Saharan sandstorm billows all around you?

Well, wonder no more. Norwegian landscape photographer Terje Sorgjerd captured this stunning scene — and many others — in his new three-minute video, "The Mountain," which he posted to the website Vimeo on April 15. [Watch the video]

Earlier this month, Sorgjerd spent a week on Mount Teide, a huge volcanic peak on Tenerife, which is the largest of the seven Canary Islands off the coast of northwest Africa. At 12,198 feet (3,718 meters), Teide is the highest point in Spain, which owns the Canaries. [World's Five Most Active Volcanoes]

On the heels of 'The Aurora'

Sorgjerd made his way to Teide shortly after finishing up another video project called "The Aurora." For that time-lapse film, the photographer trekked to northern Norway to capture the stunning northern lights display brought on by powerful solar storms in March.

Despite the frigid temperatures he endured in Norway, Sorgjerd said filming "The Mountain" was a more trying experience. [The Harshest Environments on Earth]

"This was a lot harder to shoot than 'The Aurora' video," Sorgjerd told OurAmazingPlanet. "I think I got less than 10 hours of sleep for the whole week in total up there."

That lack of sleep was somewhat by design. Sorgjerd's ambitious plan — he hoped to hit 50 different locations around Tenerife, all in the week of April 4 through April11 — didn't leave much room for rest.

"I did not bring sleeping bag or tent and was determined to photograph throughout the night and day for seven days, only sleeping/relaxing while camera was shooting sequences," he said. "This turned out to be a lot harder and [more] painful than I predicted."

Sorgjerd didn't quite hit all 50 locations, but he did get 50 different sequences of footage that he edited down into one spectacular time-lapse video. After filming was done, it took Sorgjerd four days to import and render all 2.4 terabytes of data, and another day to stitch the clips together, he said.

In addition to the Saharan sandstorm — which begins about 30 seconds into the video — there are sweeping mountain vistas, forest views in slanting golden light and shots in which thousands of bright stars light up the night.

"Hopefully it is a unique video of the Milky Way from one of the most amazing places to gaze at the stars," Sorgjerd said.

See "The Mountain" and other videos Sorgjerd has made at http://vimeo.com/terjes. And check out more of his work at www.tesophotography.com.

This story was provided by OurAmazingPlanet, a sister site to SPACE.com. You can follow senior writer Mike Wall on Twitter: @michaeldwall.