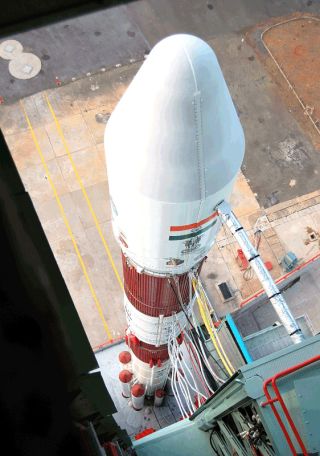 View of the Indian PSLV-C16 rocket from the top of Mobile Service Tower.
(Image: © ISRO)

The rocket blasted off at 0442 GMT (12:42 a.m. EDT) Wednesday from the Satish Dhawan Space Center on Sriharikota Island on India's east coast, where it was 10:12 a.m. local time.

The PSLV thundered into a mostly sunny sky, soaring southeast from the launch site before turning nearly due south to reach a polar sun-synchronous orbit about 511 miles above Earth.  [World's Tallest Rockets]

Producing a combined thrust of 1.9 million pounds, the launcher's six strap-on boosters and solid-fueled first stage powered the PSLV to an altitude of more than 40 miles in less than two minutes, then a hydrazine-fueled second stage took over to accelerate the rocket to nearly 9,000 mph.

Two more stages finished the job, placing the rocket and its three payloads in a stable orbit.

The announcement was met by boisterous applause from engineers inside the PSLV control center. Although the PSLV has a successful track record, the Indian space program suffered through a troubling year with consecutive launch failures of its larger GSLV rocket and accusations of institutional nepotism.

"This is the 18th launch of the PSLV, and Resourcesat 2 is the 18th remote sensing satellite of India," Radhakrishnan said in post-launch remarks.

The spacecraft carries three visible and infrared cameras with a peak resolution of 5.8 meters, or 19 feet. The imagers are upgraded versions of the cameras flying on Resourcesat 1, an aging predecessor satellite that has already outlived its lifetime projections.

Designed to operate for at least five years, Resourcesat 2 also features advanced and miniaturized electronics and carries an experimental ship-tracking Automatic Identification System instrument to collect position, speed and other information from seagoing vessels. The AIS payload was built by Com Dev of Canada.

The PSLV flight was the first space launch of 2011 for India. Three more PSLV missions are planned this year, with the next scheduled for June with India's GSAT 12 communications satellite.

Officials are still investigating and fixing problems that doomed two GSLV launches last year. India is also trying to perfect a homemade cryogenic third engine for the GSLV. The domestic powerplant was the culprit in a GSLV launch mishap in April 2010.

Turning to a pair of Russian cryogenic engines left in its inventory, ISRO launched another GSLV flight in December, but the rocket disintegrated less than a minute after liftoff when the vehicle lost control.

The PSLV flew once in 2010, but that success was overshadowed by the biting failures of the GSLV and the scrapping of a corrupt deal between the Indian space agency and a multimedia communications firm.

A controversial S-band bandwidth contract between Antrix Corp., ISRO's commercial sales division, and Devas Multimedia was annulled in February by a government cabinet committee amid allegations of corruption. Devas is headed by a former senior ISRO official, and the company paid $300 million to lease S-band communications capacity on two satellites due to be launched in the coming years.