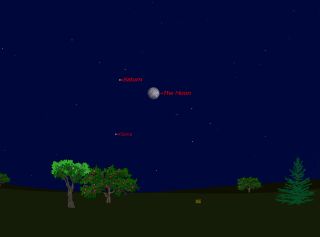 This sky map depicts how the "Saturn Triangle" of April will appear when Saturn, the nearly full moon and bright star Spica appear together in the night sky on April 16, 2011.
(Image: © Starry Night)

Skywatchers who are outside Saturday evening have a chance to see an eye-catching celestial array as the nearly full moon, a bright planet, and a bright star gather together in the night sky.

The cosmic configuration should be visible at about 8:30 p.m. local time, weather permitting, and will resemble a rather large isosceles triangle in the east-southeast sky about one-quarter of the way up from the horizon.

Accompanying the moon will be the planet Saturn, shining sedately with a yellowish-white glow to the moon's upper left, with the bright, bluish star Spica hovering to the lower left of the moon in the zodiacal constellation of Virgo. The moon will likely appear "full" to most observers, but April's full moon won't officially occur until Sunday night.

The moon, of course appears to pass Spica every month. But in recent months, Saturn has been nearby too, and so for the last several months we've referred to this trio as the "Saturn Triangle."

This sky map of Saturn, the moon and Spica shows how the triangle will appear.

What makes this triangle isosceles (a triangle with at least two equal sides) is that Spica will be located at an equal distance from both the moon and Saturn: 13 degrees. (If you hold your clenched fist out at arm's length, it will cover about 10 degrees of the sky).

So the Spica-moon and Spica-Saturn sides of the triangle will measure a bit more than a fist's width in length. The side of the triangle from the moon to Saturn will appear just 8 degrees long. [Photos: Saturn's Rings and Moons]

What you will see

The triangle will be at its highest above the horizon around midnight (local time). By around 3:30 a.m. local on Sunday, about an hour or so before dawn breaks, the trio will have moved across the sky to a position about one-quarter up from the west-southwest horizon.

But by then the triangle will appear a bit different.

Saturn is currently 803 million miles (nearly 1.3 billion kilometers) from Earth and will not change its position relative to the background stars during the course of a single night. But the moon is only 222,500 miles (358,000 km) away, and as a result will slowly shift its position toward the east (relative to the stars) during the course of the night.

In fact, from Saturday evening to early Sunday morning, the moon will appear to move noticeably closer to Spica by nearly 4 degrees, squeezing the triangle into a more compact appearance.

In fact, the moon appears to move east against the background stars at roughly its own apparent width (1/2 a degree) per hour.

Currently, Saturn appears a bit brighter than Spica. If you have a telescope, this is a good time to check out Saturn's rings.

Just 19 months ago, Saturn's rings were all but invisible to us because they were turned nearly edge-on as viewed from Earth. Now, however, they are tilted just over 8 degrees toward us, and are readily visible in telescopes with magnification of at least 30-power.