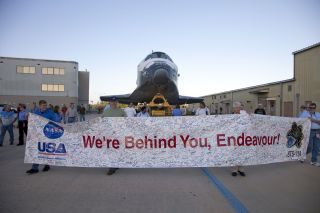 At NASA's Kennedy Space Center in Florida, employees hold up a banner to commemorate space shuttle Endeavour's STS-134 mission as it is moved from its hangar to the Vehicle Assembly Building on Feb. 28, 2011. The shuttle is due to launch its final mission STS-134 on April 19, 2011.
(Image: © NASA/Frankie Martin)

NASA wants your vote for space shuttle wakeup songs. The space agency is once again inviting the public to get involved in the long tradition of rousing astronauts on space shuttle missions with specially chosen songs.

The polls opened today (March 29) for the public to vote on the best original song to wake up space shuttle commander Mark Kelly and his five crewmates during their STS-134 mission to the International Space Station. The mission, which launches on April 19, will be the final flight of the space shuttle Endeavour before the orbiter is retired later this year. [Photos: Shuttle Endeavour's Final Mission]

A total of 1,350 original songs were submitted to the competition to be played for the crew. The so-called NASA Space Rock Committee has completed the judging and narrowed that list down to 10 finalists.

The contenders include songs with names such as "Boogie Woogie Shuttle," "Spacing Out," and "The Countdown Blues."

Public voting opened today, and will run through the shuttle Endeavour's launch. The two songs receiving the most votes will be played during the last two days of Endeavour's planned 14-day mission.

During shuttle missions, astronauts are regularly treated to a daily wakeup song, which is typically picked for individuals on the crew by their families.

NASA held a similar contest for the last mission, the STS-133 flight of the space shuttle Discovery, which was that orbiter's final mission. In that case, NASA allowed the public to vote from a list of 40 songs that have previously awoken the shuttle crew on space missions. [Photos of Discovery's Final Mission]

The winner of Discovery's contest was Colorado-based rock band Big Head Todd and the Monsters, with their song "Blue Sky," which was inspired by former NASA astronaut Eileen Collins, the first female space shuttle commander.