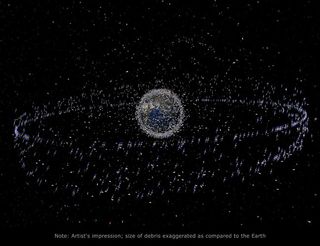 Lasers on the ground could be used to nudge debris in orbit, which could help move dangerous space junk away from satellites and spacecraft, scientists working with NASA suggest.

Space debris might not sound like much of a threat until one realizes that in low-Earth orbit, "these objects are typically going at about 7.5 kilometers per second, or almost 17,000 miles per hour," said physicist James Mason, a NASA contract scientist at the Universities Space Research Association. "To put this in perspective, a 1-ounce piece of debris traveling at this velocity has about the same kinetic energy as a 2-ton car traveling at 60 miles per hour."

The problem that debris poses gets worse when collisions spawn even more debris, eventually cluttering space with high-speed shrapnel, a scenario nicknamed "Kessler syndrome" after NASA scientist Donald Kessler, who predicted it in 1978.

"The February 2009 collision between an active Iridium sat-phone satellite and a defunct Russian Cosmos weather satellite was the first example of an active satellite being catastrophically destroyed in an accidental collision," Mason said. "Collisions like this were predicted by Kessler in 1978, and he predicted that if the number of debris in certain orbits got high enough then there would be a cascading series of collisions that might eventually render whole orbits unusable." [Worst Space Debris Events of All Time]

This runaway cascade of destruction is probably already in effect in some orbits around the Earth, he added.

"According to NASA's Orbital Debris Program Office, we have passed this critical density of objects in the low-Earth orbit at about 900 to 1,000 kilometers (560 to 620 miles) altitude," Mason said. "Even with no new launches and with the responsible post-mission disposal of dead satellites or rockets, their models predict that the population is going to continue to grow in this region."

A number of proposals have been floated to help clean up this garbage, such as rendezvousing with large objects like rocket bodies and propelling them back at Earth. However, such missions would be complex and expensive.

Instead of going up into space to bring down garbage, scientists have suggested remaining on the ground and zapping it with lasers.

A 1996 study from NASA dubbed Project ORION that was co-sponsored by the U.S. Air Force proposed using powerful beams to vaporize surface material on targets, providing enough recoil to drive it Earthward. The problem, of course, is that such lasers could be seen as weapons threatening other spacefaring nations.

Now, Mason and his colleagues at NASA Ames Center and Stanford University suggest much less powerful and far cheaper lasers that can push debris without damaging it.

Light can exert a push on matter, a fact that scientists have used to develop solar sails that can fly through space on sunlight. The researchers suggest that a medium-power commercially available laser with a 5-to-10-kilowatt beam constantly focused on a piece of debris could work, located someplace such as the Plateau Observatory in Antarctica.

As an example, they considered a real mid-size piece of debris — ASTRO-F, a discarded lens cap 31 inches (80 centimeters) wide and 11 pounds (5 kilograms) in mass from the Japanese Akari telescope in a near-circular orbit about 434 miles (700 kilometers) in altitude. A laser at PLATO shining on this piece of junk for about two hours over the course of two days could move it away from a dangerous orbit.

"This is truly a unique approach to the problem," Mason told SPACE.com. "Most previous work has focused on removing debris, which is a more complex and costly proposition. What we have suggested is simply to prevent collisions on a case-by-case basis and allow the debris to continue to decay in their orbits naturally due to atmospheric drag."

"It will require more research to confirm, but we suspect that if this is done for enough debris objects, then it might be able to stabilize the population and slow the Kessler syndrome," he added.

The 5-kilowatt laser would cost about $800,000, and a single device could probably engage about 10 objects a day. However, the scientists do note that the actual cost of an operating system, including telescope, would likely be tens of millions of dollars.

It may be possible to perform a nearly free demonstration of this idea using existing capabilities, such as those of the Starfire Optical Range at Kirtland Air Force Base. The researchers do stress that any system should be done as an international collaboration because of the obvious space warfare implications. [7 Sci-Fi Weapons of Tomorrow Today]

"The main question that needs to be answered is what is the long-term effect on the overall debris situation?" Mason said, "We need to do population modeling to determine if the system really will be sufficient to halt or slow the Kessler syndrome. We hope to work closely in the future with colleagues at NASA to model the effects."

The scientists note this system could be used to give a nudge to more than just garbage — they could push specially designed satellites, helping them save weight on propellant. As to whether or not these nudges have the potential for use in space warfare, "generally, for large objects like satellites, the force is too small to significantly affect the orbit," Mason said.

The scientists detailed their findings online March 9 in a paper submitted to Advances in Space Research.