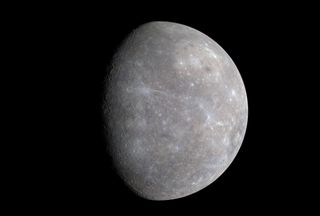 NASA's Messenger spacecraft will make history tomorrow (March 17) when it becomes the first probe to orbit the planet Mercury. But it also promises to help solve a host of mysteries about the solar system's innermost planet.

The seven instruments aboard Messenger, fortified to withstand the blistering environs near the sun, will help researchers investigate the many enigmas of Mercury — such as its its unexpected magnetic field, and whether the planet has water ice at its poles.

As the solar system's innermost planet, Mercury is relatively unexplored considering its proximity to Earth. Discovering more about this searing hot, rocky sibling of Earth could shed light on how our solar system formed, and how alien planets coalesced around faraway stars, researchers said.

"Many exoplanets discovered to date are as close or closer than Mercury is to our host star," said Messenger principal investigator Sean Solomon, of the Carnegie Institution of Washington. He and his colleagues discussed Messenger at a press conference yesterday (March 15). [Photos: New Views of Mercury From Messenger]

Since it launched in August 2004, the $446 million Messenger (short for Mercury Surface, Space Environment, Geochemistry and Ranging) orbiter has made nearly 15 laps around the sun, flying by Earth, Venus and Mercury to slingshot itself into position for orbital entry.

During its orbital insertion maneuver tomorrow at about 8:45 p.m. (0045 GMT on March 18), the spacecraft will fire its main thruster for about 15 minutes. The burn — which will slow the probe down enough for Mercury's gravity to capture it — will consume nearly a third of the propellant that the spacecraft carried at launch, researchers said. [Video: Messenger's Mercury Orbit Arrival]

"For the first two weeks of orbit, we’ll be focused on ensuring that the spacecraft systems are all working well in Mercury’s harsh thermal environment," Messenger mission systems engineer Eric Finnegan, of APL, said in a statement.

After that, "we'll get the first global observations of the surface, of aspects of the interior, of the tenuous atmosphere Mercury has, of the magnetosphere — the envelope of space as a result of the planet's internal magnetic field — and the environment that Mercury passes through, which is quite unique as a consequence of it being the closest planet to the sun," Solomon explained.

During Messenger's 6 1/2-year journey to Mercury, the probe's seven scientific instruments have not remained idle. Researchers have been calibrating them and enhancing their software over the years to optimize their performance, said Messenger mission operations manager Andy Calloway, also of APL.

But that work was just a dress rehearsal for what's coming up.

The gamma-ray device needs to cool down starting March 22 to function — a special challenge so close to the sun. It will measure gamma-ray emissions from Mercury's surface to determine the abundance of elements in the crust, including reflective materials at the planet's poles that might be water ice.

On March 23, most of the other instruments should turn on, researchers said. Messenger's magnetometer will measure the unexpected magnetic field around Mercury in detail to determine its strength, while the Mercury Atmospheric and Surface Composition Spectrometer will study the planet's tenuous atmosphere by measuring ultraviolet light emissions.

The atmospheric and magnetic processes the equipment should observe "happen at extremely dynamic time scales, and we benefit tremendously from being on site as opposed to trying to monitor them from Earth," Solomon said.

Also on March 23, the Mercury Laser Altimeter will activate. This instrument will scan the planet's surface with an infrared laser to map its topography. By analyzing the depth of the floors and the height of the rims of craters at Mercury's poles, scientists should be able to tell if these pits could spawn the permanent shadows needed for ice to survive, Solomon said.

In addition, the Energetic Particle and Plasma Spectrometer will analyze the charged particles in the magnetosphere around Mercury and those coming from its surface, and the spacecraft's X-Ray Spectrometer will help map surface mineral composition.

The probe's neutron spectrometer will analyze Mercury's surface composition, which could help shed light on how the surprisingly dense planet formed and evolved, researchers said.

Perhaps lighter elements on Mercury's surface got seared away by the sun, for example, or perhaps a giant planet-sized object smashed into Mercury and ripped off its less-dense surface shell.

"These are all rather simple theories, and I and the science team will wager that the true story is more complicated, and maybe involves a combination of processes," Solomon said. "We hope to reject one or more of these theories, and it would not surprise any of us if we have to come up with new theories to explain Mercury."

On March 29, the Mercury Dual Imaging System will power on. This camera system will provide a complete map of the surface of Mercury with resolutions as fine as 250 meters per pixel. By orbiting Mercury, "we'll be able to control viewing direction, the lighting direction, to a much greater degree than during flybys, for much better pictures," Solomon said.

An Earth year at Mercury

Arranging which of Messenger's many instruments should be aimed at Mercury at any given time is an elaborate dance. Many factors must be taken into consideration, researchers said — such as the need to keep Mercury's sunshade between it and the sun to keep the probe from frying.

Messenger's highly elliptical orbit also poses challenges, as does its varying distance from Earth, which limits how much data the probe can relay back home.

"We developed an automated science planning software package to come up with a year-long sequence of science observations to accomplish all the mission objectives yet satisfy these constraints," Solomon said.

The plan is for Messenger to observe Mercury for a year, "which should be sufficient to answer the basic questions that framed the mission we set out to answer," Solomon said.

Messenger might be able to keep flying and observing Mercury beyond that timeframe, Solomon added, but a decision about whether or not to extend the probe's mission will come at a later date.