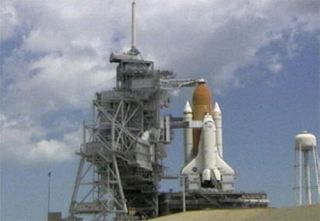 The space shuttle Discovery sits atop Launch Pad 39B during its initial fueling test of its external tank for NASA's STS-114 mission.
(Image: © NASA/KSC.)

NASA onceagain fueled the space shuttle Discovery's external tank for Friday in a testto iron out sensor and valve glitches.

Over thecourse of 11 hours, shuttle workers pumped and drained more than 500,000gallons (1.9 million liters) of supercold propellant into Discovery's externaltank, which stands upright with the rest of the launch stack at Kennedy SpaceCenter's Pad 39B in Cape Canaveral, Florida.

Unlike anApril 14 test,engineers detected no fuel gauge sensor malfunctions during the fuelingprocess, but did monitor an identical pressure valve anomaly from the earlierrun.

"We hadjust a perfect test as far as I'm concerned," said William Parsons, NASA's shuttleprogram manager, during a post-test teleconference. "[But] we still have a lotof data to look at."

IfDiscovery's STS-114 crew - NASA's first shuttle astronauts to fly since the2003 Columbia disaster - had been aboard the orbiter, conditions would havebeen ripe to launch them into space.

"It was agood day," said Sandy Coleman, NASA's external tank project manager, during theteleconference. "We could have launched today."

Concernsover the potential fatal danger posed by icedebris shaking off the tank prompted shuttle engineers to devise a newheater to limit the hazard.

But thereare no current plans to check that replacement tank as well by pumping it fullof the liquid oxygen and liquid hydrogen fuel Discovery consumes duringliftoff. NASA officials, however, could call for that extra test afterreviewing data from Friday's activity.

"Right now,I don't have a third tanking test in my plan," Parsons said, conceding thatsome shuttle officials believe such a test could be warranted, but have agreedto look over the data from today's test first. "But I wouldn't rule it outcompletely."

NASA launchdirector Michael Lienbach said the addition of a third tanking test could pushDiscovery up to a week into its current launch window, which runs from July 13to July 31. If shuttle engineers push hard, however, they could accomplish thefeat by the window's opening, he added.

Anotherconcern revolving adequate clearance between Discovery's new orbitalboom - which astronauts will use to scan the orbiter for damage - and avital communication antenna has been addressed, NASA officials said, addingthat the separation between the two devices is slim during deployment.

"We've beenaware of this and we have a way to ensure we deploy the [boom]," Parsons said."I don't believe this is going to be a real big problem, this is just anoperational workaround."

Launchrestrictions require that all four sensors function properly before liftoff,though two of the devices cut out in the April 14 test. Since then, padengineers have swapped out wiring and rechecked the connections running betweenDiscovery and its tank. The result, apparently, was a fully function sensorsuite during the second test fueling.

One concernnot solved in the May 20 test revolved around a pressurization valve at thevery top of Discovery's external tank. The valve apparently cycled the exactnumber of times - 13- as it did during the April 14 tanking test, which is justshy of breaching launch restrictions for an actual space shot. In a normallaunch, the valve cycles between eight and nine times.

"We've gotto understand it," Coleman said of the glitch. "We don't like flying right onthe edge."

Colemansaid one potential culprit is a defuser, a sort of mesh screen that that sitsat the very top of the hydrogen tank and disperses fuel in a manner thatprevents hot spots from developing on the tanks aluminum skin. The defuser onDiscovery's tank is different from those on all past external tanks and willeventually be swapped out with an older version, she added.

Lienbachsaid that Discovery will begin to make the 4.2-mile (6.7-kilometer) journeyback to the VAB no earlier than May 24, after any remaining hydrogen has boiledout of its external tank.

There, the171,000-pound (77,564-kilogram) orbiter will be demated from its launch stackand attached to its new one. The enter assembly should once again reach thelaunch pad by mid-June, shuttle officials said.