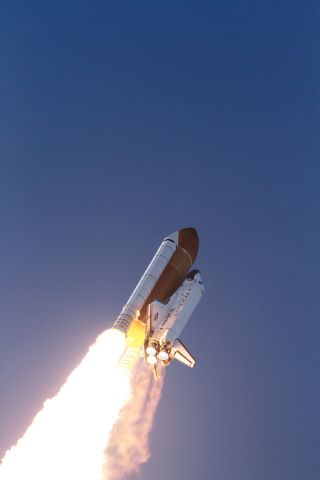 Space shuttle Discovery heads to space after lifting off from Launch Pad 39A at NASA's Kennedy Space Center in Florida to begin its final flight to the International Space Station on the STS-133 mission. See more photos from Discovery's final mission to space.
(Image: © NASA)

When NASA's space shuttle Discovery blasted off on its final spaceflight last week, thousands turned out to watch the historic launch. But only a lucky few — including a jet passenger, a student balloon and a daredevil former astronaut on a skydive — spotted Discovery lift off from the air.

One of the most amazing views of Discovery's last liftoff on Tursday (Feb. 24) came from software developer Neil Monday, who recorded the shuttle launch with his iPhone while looking through the window of a passenger jet flying out of Orlando International Airport in Florida. [Photos of Shuttle Discovery's Last Launch]

Monday posted the video on YouTubeand it took the Internet by storm.

Monday even described the experience to the MSNBC Cosmic Log, where you can read how he made the video. It turns out he and his fellow passengers were on a delayed flight – had they taken off on time, they would have missed the awesome shuttle view.

Another aerial view of the shuttle launch was captured from much higher than the plane carrying Monday home from Florida. A high-altitude balloon spotted Discovery soaring into orbit from a height of more than 70,000 feet (21,200 meters).

The student balloon mission was a joint effort of two non-profit educational organizations, the Challenger Center for Space Science Education and Quest for Stars.

High school students from San Diego, Calif., helped design part of the balloon and project organizers launched it just hours before Discovery blasted off from a seaside pad at NASA's Kennedy Space Center on Thursday afternoon. It caught a stunning snapshot of Discovery arcing off planet Earth on its way into space.

The helium balloon, called Robonaut-1 (in honor of Robonaut-2, a robot riding on Discovery), carried multiple cameras, an onboard computer system, mobile phones and a Global Positioning System (GPS) device. Once it reached its maximum altitude, it popped and descended back to Earth on a parachute.

Parachutes were also involved in one last amazing photo of Discovery's launch from the air.

According to the Huntsville Times in Alabama, two avid skydivers – one a former astronaut – snapped a spectacular travel portrait with the launching Discovery in the background.

The photo, which you can see online here, shows skydiver Fred Leslie giving two thumbs up from 14,000 feet up as Discovery soars into space in the background. It was taken by his wife Kathy during a skydiving trip over Deland, Fla.

The Leslies are accomplished skydivers and Fred Leslie has flown in space. He flew aboard the space shuttle Columbia in 1995 during a 16-day mission focused on materials science.

In the skydiving photo, Leslie was wearing the blue flight suit he wore during his shuttle mission, the Huntsville Times reported.

"He came in to work with NASA about the time the shuttle started, and he's retiring in about two years, so he feels like he's going out with the shuttle," Kathy told the Huntsville Times.

Currently, Fred Leslie is based at NASA's Marshall Space Flight Center in Huntsville, where he is involved with global atmospheric modeling and turbulence studies, according to NASA records.

Discovery launched into space on Thursday, Feb. 24, and arrived at the International Space Station two days later. The mission, STS-133, is the final flight of shuttle Discovery before it is retired along with the rest of NASA's space shuttle fleet later this year.

Discovery's 11-day mission is delivering the humanoid Robonaut 2 to the space station along with a new storage room. Two spacewalks are planned.