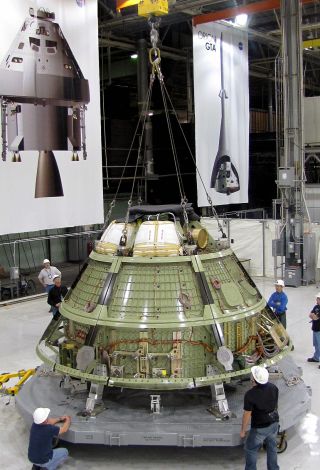 Engineers packed up NASA's first prototype of its new manned Orion space capsule at a New Orleans assembly plant today (Feb. 10) to begin a grueling round of ground and water tests.

The space agency shipped the Orion space capsule from its Michoud Assembly Facility to the Denver-based testing grounds of aerospace company Lockheed Martin, which is building the new astronaut-carrying spacecraft for NASA. The first unmanned test flight could occur in 2013, Lockheed Martin officials have said.

"This is a significant milestone for the Orion project and puts us on the right path toward achieving the president’s objective of Orion's first crewed mission by 2016," said Lockheed Martin vice president Cleon Lacefield, the company's Orion program manager. "Orion's upcoming performance tests will demonstrate how the spacecraft meets the challenges of deep-space mission environments such as ascent, launch abort, on-orbit operations, high-speed return trajectory, parachute deployment and water landings in a variety of sea states."

Originally designed to launch atop NASA's Ares I rocket, Orion vehicles wereexpected to serve as NASA's successor to its space shuttle fleet, which set to retire this year after 30 years of spaceflight. The Orion space capsule was expected to ferry astronauts to and from the International Space Station.

Unlike NASA's space shuttles, Orion capsules won't be landing on a runway. They are expected to splash down in the ocean like the space agency's early Mercury, Gemini and Apollo spacecraft.

Lockheed Martin, for example, has performed an in-depth study on linking multiple Orion capsules together and sending them on a manned mission to an asteroid. Lockheed officials call the asteroid mission plan "Plymouth Rock."

Sending astronauts to visit an asteroid by 2025 is one of the main goals for NASA's new space plan.

NASA's gumdrop-shaped Orion spacecraft are a bit larger than the space agency's Apollo capsules, with a diameter of about 16 1/2 feet (5 meters) at the widest point. They were originally designed to carry four astronauts to the moon or six astronauts to low-Earth orbit, though NASA scaled down the initial crew size to four people in 2009.

The first Orion spacecraft, which NASA shipped out today, will undergo tests at Lockheed Martin's Denver facility to check if it is space worthy enough to safely carry astronauts on deep space missions, Lockheed officials said.

Lockheed engineers will attach the Orion capsule prototype's heat shield and aeroshell covering once it arrives in Denver.

After the Lockheed tests are complete, NASA plans to run water landing tests of Orion at the Langley Research Center in Virginia.

Orion engineers plan to dunk the Orion capsule in a so-called Hydro Impact Basin, which is used to "test, validate and certify all human-rated spacecraft for NASA," Lockheed officials said in a statement.

In May 2010, the space agency successfully tested the Orion launch abort system – a rocket-propelled escape tower designed to pull the capsule free of its rocket during a launch emergency.

Last July, the spacecraft's Orion design passed its Phase 1 safety review of NASA's Human Rating Requirements – a rigorous check to determine if the capsule was safe for carrying astronauts.