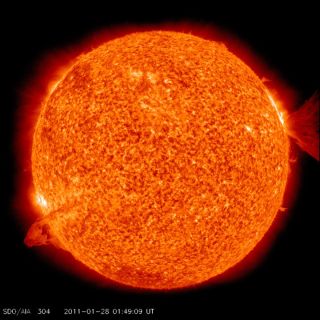 This still from SDO caught the action in freeze-frame splendor when the Sun popped off two events at once (Jan. 28, 2011). A filament on the left side became unstable and erupted, while an M-1 flare (mid-sized) and a coronal mass ejection on the right blasted into space.
(Image: © NASA/SDO/GSFC)

The twin solar storms occurred in concert and marked an impressive start for the 2011 space weatherseason.

A video recorded by NASA's Solar Dynamics Observatory shows the two sun storms erupting from opposite sides of the star. Neither of the events posed a space weather threat to Earth or its satellites, NASA officials said.

A still image released by NASA shows a filament — a long magnetic tendril of super-hot plasma — become unstable on the sun's left side (as seen by the SDO spacecraft). As the tendril snapped, it burst into a major solar eruption.

At the same time, a major event occurred on the other side of the sun. A powerful M-1 class flare blasted into space from the right side of the sun, along with a massive explosion of charged solar particles — which scientists call a coronal mass ejections.

Scientists measure solar flares according to a class system that includes three tiers. At the top of the list are X-class flares, which are major events that can trigger planetwide radio blackouts and long-lasting radiation storms, NASA officials have said. M-class flares, like the M-1 event observed today, are medium-size storms that can cause brief radio blackouts  affecting Earth's polar regions, spurring minor radiation storms, they added.

The third class of solar flares is the C-class. These events are typically small and have few noticeable consequences on Earth, NASA officials have said.

When aimed at Earth, strong solar storms can damage space-based assets — like satellites and crewed spacecraft — as well as technological infrastructure on Earth, such as communications and power grids.

But none of those effects are expected from today's events, NASA officials said.

"Neither event was headed towards Earth," officials with NASA's SDO mission said in a statement.

The video recorded by the SDO spacecraft covers the period of time between Jan. 26 and Jan. 28. Several other flashes and burst of solar activity are also visible in the active region of the sun's right side, SDO officials said.