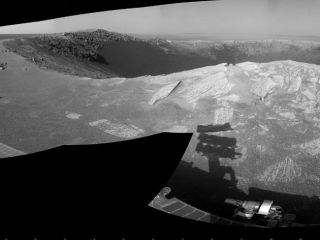 Santa Maria crater, about 295 feet (90 meters) wide, dominates the scene in this 360-degree view from NASA's Mars rover Opportunity, taken on Dec. 16, 2010. Opportunity used its navigation camera to take the frames combined into this mosaic. South is at the center. North is at both ends. The view is presented as a cylindrical projection.
(Image: © NASA/JPL-Caltech [Full Story])

NASA's Mars rover Opportunity has its plans for New Year's Eve all sorted out — it will be poking around a football-field-size crater called Santa Maria.

Opportunity made it to Santa Maria, which is about 295 feet (90 meters) wide, on Dec. 16. It will spend a few more weeks examining rocks exposed at the crater, checking out minerals that likely formed in the presence of water billions of years ago, researchers said.

The Santa Maria stop marks a slight detour for Opportunity, which is making its slow, steady way to a giant crater called Endeavour.

The rover turned its wheels toward the 14-mile-wide (22-kilometer-wide) Endeavour in the summer of 2008. Opportunity has since covered about 9 miles (14.5 km), with about 3.7 miles (6 km) left before reaching Endeavour, researchers said.

Opportunity has been hopping from crater to crater since it landed on Mars in January 2004, tasked with looking for evidence of past water activity on the red planet.

Most of this water activity dates back about 4 billion years, so craters are key to Opportunity's mission, researchers have said. Craters give the golf-cart-size rover the chance to probe ancient rocks that otherwise would remain buried and out of reach.

And Santa Maria is special as far as craters go. The crater appears to be extremely young in the geological scheme of things — perhaps just a few million years old, researchers said. So its surface hasn't been too grimed over by weathering.

Opportunity and its twin rover, Spirit, both landed on Mars in January 2004. Their mission was initially slated to last only about three months, but both have far surpassed that lifetime.

Between them, the six-wheeled robots have traveled about 21.3 miles (34.3 km) and taken about 250,000 pictures on the red planet's surface, researchers said.

Last year, Spirit got bogged down in soft sand, and it stopped communicating with Earth in spring 2010. NASA officials haven't given up hope of hearing from the rover. But they've said that pessimism is in order if Spirit hasn't made a peep by March, when the Martian sun will be strong and the rover will have had plenty of chances to warm up and power up.