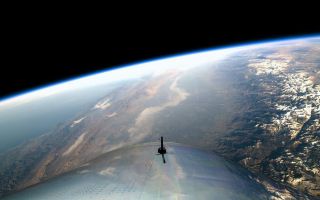 Virgin Galactic will take to the skies again Wednesday (Feb. 20), if all goes according to plan.

The flight will be the first for Unity since its historic trip to suborbital space in mid-December. That was the first crewed spaceflight to launch from U.S. soil since NASA grounded its space shuttle fleet in 2011. [In Photos: Virgin Galactic's SpaceShipTwo Unity 1st Trip to Space]

VSS Unity will be a little heavier tomorrow than it was on the Dec. 13 flight; in fact, it will be close to the weight expected during commercial operations, which will see the vehicle tote six passengers (as well as various scientific payloads) on brief trips to suborbital space.

Tomorrow's flight also gives the company a chance to test and tweak some other design aspects.

"We are now at the stage where we can confirm some of the aspects of the customer cabin, and this will be a continuing theme as we enter this final stage of flight test," Virgin Galactic representatives said in a statement about tomorrow's test flight.

"It is of paramount importance to our future business success that we not only give our future astronauts a safe ride, but an experience which exceeds expectations," they added. "We know, as part of a Group that has led the way in commercial aviation customer experience, cabin design is fundamental to that objective, and so this element is an integral part of our flight test program."

SpaceShipTwo is carried aloft by the custom-built plane WhiteKnightTwo, which drops the spaceliner at an altitude of about 50,000 feet (15,000 meters). At that point, SpaceShipTwo's onboard rocket motor fires up, powering the vehicle to space.

Customers will experience a few minutes of weightlessness and get to see the curve of Earth against the blackness of space before SpaceShipTwo comes down for a runway landing, company representatives have said. A ticket to fly currently costs $250,000; more than 600 people have put down deposits to reserve a seat, company representatives have said.

Virgin Galactic founder Richard Branson has said he expects commercial flights to begin this year. He has also said that he will be on the maiden operational flight of VSS Unity.