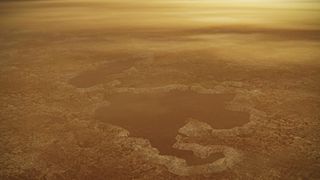 An artist's depiction of a lake near Titan's north pole.
(Image: © NASA/JPL-Caltech)

Champagne is supposed to be bubbly. So is a foaming bath. But a mixture designed to mimic the frigid lakes on an alien moon? That's a little more surprising. Especially when those bubbles come out of nowhere and explode.

But that's what Kendra Farnsworth and her colleagues found during a set of experiments designed to help the team understand how compounds like those found on the surface of Saturn's largest moon, Titan, interact. Conveniently, the accidental bubble discovery could help explain one of the mysteries spotted by NASA's Cassini mission — "magic islands," bright patches on radar images that suddenly disappeared.

"[I] stumbled across bubbles: At the beginning, it wasn't the main goal of the study but it was one of those really surprising results," Farnsworth, a doctoral student in planetary science at the University of Arkansas and the lead author of a new paper describing the research, told Space.com. "Bubbles had been predicted on Titan, but nobody had actually seen them or created them in a laboratory at that time."

Related: Saturn's Moon Titan May Have 'Phantom Lakes' and Caves

Titan's bubbly prediction was one of three possible explanations scientists could come up with for the disappearing "magic islands" in the Cassini data, which had to be transient structures that reflected more light than their surroundings. But a similar signal could be caused by waves, and scientists don't have the observations they would need to be sure what the phenomenon was.

Before the bubbles popped into her life, Farnsworth was running two different experiments in a special 6-foot-tall chamber designed to mimic the much colder temperatures and slightly higher pressures found on Titan inside a terrestrial lab.

In the experiment where the bubbles first appeared, Farnsworth had set out to measure how much nitrogen gas would dissolve in different mixtures of liquid methane and ethane, the organic compounds that make up Titan's strangely Earth-like system of rainfall, lakes and seas. As she warmed up these ponds from their chilliest point, colder than Titan's modern surface temperatures, Farnsworth noticed small bubbles would snake to the surface.

But the real surprise came in a different experiment, Farnsworth said, one based on slowly adding liquid ethane into liquid methane at Titan's surface temperature. The experiment seemed to be plodding along — until it wasn't.

"At some point, the bubbles exploded and came up and hit my camera; I couldn't see anything out of my camera," Farnsworth said. "I'm like, 'Wait a minute, I wasn't expecting this.'" Suddenly, the titrations themselves weren't as interesting as the bubbles phenomenon, with all its strangeness. She and her colleagues kept experimenting with the moon solutions to try to understand the conditions that made for bubbles.

Particularly interesting to Farnsworth was the slightly warmer scenario meant to mimic modern Titan. In these experiments, the team found, two factors had to change simultaneously: the temperature of the liquid and the relative proportion of methane and ethane. The combination of changes takes the mixture from stillness to a spurt of bubbles.

"There's nothing and they explode," Farnsworth said. "They're more violent than we ever expected them to be."

Because of the combination of changes required, Farnsworth expects that these outbursts occur only at very specific places on Titan's surface, perhaps in underground reservoirs or where a river meets a lake.

"It could just very well be perfectly calm and then sometimes you just have an explosion of bubbles," she said. "It'd be kind of fun."

The research is described in a paper published Dec. 3 in the journal Geophysical Research Letters.