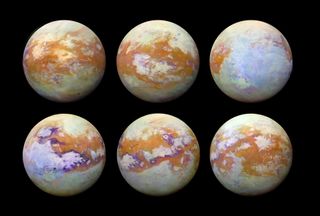 These mosaics of the Saturn moon Titan's surface were constructed using data gathered over 13 years by the Visual and Infrared Mapping Spectrometer instrument aboard NASA's Cassini spacecraft.
(Image: © NASA/JPL-Caltech/University of Nantes/University of Arizona)

But the new mosaics are pretty much seamless — a breakthrough made possible by a reanalysis of the VIMS data and laborious hand processing of the resulting mosaics, mission team members said.

"With the seams now gone, this new collection of images is by far the best representation of how the globe of Titan might appear to the casual observer if it weren't for the moon's hazy atmosphere, and it likely will not be superseded for some time to come," NASA officials wrote in a statement Wednesday (July 18).

Indeed, the photos give viewers a new appreciation for Titan's complex and varied surface, which boasts dunes of carbon-containing organic compounds, icy deposits and vast seas of liquid hydrocarbons. (Titan is the only extraterrestrial object known to harbor stable bodies of liquid on its surface.)

In visible-light images captured from above Titan's thick, nitrogen-dominated atmosphere, none of this diversity comes through; the 3,200-mile-wide (5,150 kilometers) moon looks like a fuzzy, orange-brown ball.

Scientists might get some sharp, up-close looks at the Titan landscape in the not-too-distant future, however: A mission called Dragonfly would explore the huge moon's surface, and assess its potential to host life, using a robotic minihelicopter. Dragonfly is one of two finalists, along with a comet sample-return effort, for NASA's next New Frontiers mission slot. The agency aims to announce a winner in 2019 and launch the mission by 2025.

The $3.2 billion Cassini mission — a joint effort of NASA, the European Space Agency and the Italian Space Agency — launched in 1997 and reached Saturn in the summer of 2004. Cassini zoomed through the gas-giant system for more than 13 years, gathering a wealth of data about the planet, its iconic rings and its many moons. The Cassini mother ship also carried a lander called Huygens, which touched down on Titan in January 2005.

The groundbreaking mission came to an end in September 2017 with an intentional death dive into Saturn — a move designed to ensure that Cassini would not contaminate Titan or the fellow potentially life-supporting satellite Enceladus with microbes from Earth.