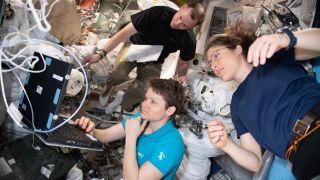 NASA astronauts Anne McClain, Christina Koch and Nick Hague conduct spacesuit maintenance in the Quest airlock of the International Space Station. Like most Americans on Earth, astronauts has to file their taxes for 2018 by April 15, 2019.
(Image: © NASA)

For U.S. citizens, there's no escaping Tax Day — not even if you've left planet Earth.

Millions of Americans are expected to have filed their taxes for 2018 by midnight tonight today, and the three NASA astronauts currently living and working at the International Space Station are no exception — even if they are orbiting 250 miles (400 kilometers) from the nearest H&R Block.

Tax Day can be a big source of anxiety for those of us who waited until the last minute to get started (you know who you are), but NASA's astronauts are no procrastinators on filing their taxes. "Generally speaking, they do it before their mission begins or [they] get assistance from family members to file in their stead," NASA spokesperson Brandi Dean told Space.com in an email.

NASA astronauts Nick Hague, Anne McClain and Christina Koch make up half of the six-person Expedition 59 crew. McClain launched to the space station in the Soyuz MS-11 spacecraft in December, while Hague and Koch arrived on the Soyuz MS-12 in March.

Because McClain left for space before the end of 2018, she couldn't have finished filing her taxes for the year beforehand and may have had some help from her husband down on Earth. Hague and Koch, on the other hand, had three months to do their taxes on Earth before they launched.

Also onboard the station are Canadian Space Agency astronaut David Saint-Jacques and cosmonauts Oleg Kononenko and Alexey Ovchinin of Russia's space agency, Roscosmos. The non-American crewmembers aren't off the hook for filing taxes; both Canada and Russia have their Tax Day coming up on April 30.