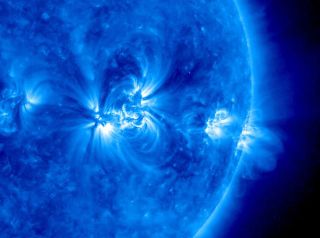 An image of the sun in ultraviolet light showing a string of active regions near the Sun's equator over about 36 hours.
(Image: © NASA)

Astronomers may have finally figured out what causes the sun's 11-year cycle of activity, and it involves a "tsunami" of magnetic fields.

The sun, like other stars, goes through a cycle marked by a change in magnetic activity, levels of radiation, and the number and size of sunspots. While our sun's 11-year cycle was discovered more than a century ago, predicting exactly when one cycle ends and a new one begins has been an ongoing challenge.

A pair of related studies have mapped out the sun's activity over the course of 140 years, looking for clues about the solar cycle that are visible on the surface. By looking at the way bright flashes of ultraviolet light migrate across the sun's surface, the researchers discovered that the sun's mysterious 11-year cycle may be marked by a "terminator" event that ends one cycle and a "tsunami" of magnetic fields that initiates a new one. Those bright flickers of ultraviolet light and the sun's magnetic fields appear to drive the cycle itself, and monitoring those flashes could help scientists predict when a new cycle will begin.

"We have observed the sunspot cycle for hundreds of years," Mausumi Dikpati, a scientist at the National Center for Atmospheric Research (NCAR) and lead author of the tsunami study, published in the journal Nature in February, said in a statement. "But it's been a mystery what mechanism could transport a signal from the equator, where the cycle ends, to the sun's midlatitudes, where the next cycle begins, in such a relatively short amount of time."

The first study looked for markers of the end of a solar cycle. Using 140 years of solar observations, the team of scientists studied the movement of so-called coronal bright points, or flickers of extreme ultraviolet light in the sun's corona.

The light flickers first appear at a higher altitude than the sunspots and move toward the equator, the researchers found. There, the flickers overlap with the sunspots in the midlatitudes before both flickers and sunspots reach the equator and disappear, the study said.

Their disappearance, which the scientists deemed as the "terminator" event, is shortly followed by a large burst of activity in the flickering lights.

The second study, published later in July in the journal Solar Physics, built on the findings of the terminator study, suggesting that the bright flickers marked the movement of the sun's magnetic fields. These magnetic fields wrap around the sun like rubber bands on the east and the west, according to the statement, and also move toward the equator near the end of the solar cycle.

Such fields also act as "magnetic dams," trapping plasma behind them as they travel. Once these fields reach the center, the opposing charges of the magnetic fields moving in from the east and the west collide with each other, releasing the fields' pent-up magnetic charge in a fluid-like motion. The researchers called this rush of fluid a "tsunami."

As the tsunami of solar plasma reaches the sun's midlatitudes, it encounters the incoming magnetic fields of the next solar cycle, and this collision results in the bright light flickers, the study said.

The authors of the studies said they plan on using the Parker Solar Probe, the Solar Dynamics Observatory and the Daniel K. Inouye Solar Telescope to observe the current solar cycle. As it comes to an end in the first half of the year 2020 and a new one begins, the researchers will be able to put their results to the test.

"We believe the results … could revolutionize our understanding of the solar interior and the processes that create sunspots and shape the sunspot cycle," Scott McIntosh, a scientist at NCAR and lead author of the "terminator" study, said in the statement.