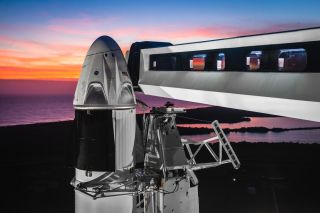 NASA and SpaceX are meeting in Florida (Feb. 22) to review plans to launch the first Crew Dragon spaceship built for astronauts on March 2 and you can find out how their discussion goes in a live webcast.

SpaceX and NASA officials will spend the day at the Kennedy Space Center in what the agency calls a Flight Readiness Review, a standard preflight meeting that — like its name suggests —  convenes mission managers to discuss if a space mission is ready for launch. NASA will announce the results of the meeting this evening. You can watch that press conference live here, courtesy of NASA TV, beginning no earlier than 6 p.m. EST (2300 GMT).

"The meeting provides NASA and SpaceX the opportunity to assess the mission status, the currently targeted launch date and the work that needs to be completed prior to the critical flight test.," NASA officials wrote in a status update today.

SpaceX's upcoming Crew Dragon test flight, called Demo-1, is an uncrewed mission to the International Space Station. It will launch on a Falcon 9 rocket in the wee hours of March 2 and dock at the station a day later. Crew Dragon will stay linked to the station for five days while astronauts unload 400 lbs. (181 kilograms) of supplies from the spacecraft. Crew Dragon is scheduled to return to Earth on March 8.

If all goes well with the mission, SpaceX will launch a Crew Dragon abort test in the spring and its first astronaut crew in July.

SpaceX is one of two companies with NASA contracts to fly astronauts to and from the International Space Station under the agency's Commercial Crew program. In 2014, NASA awarded SpaceX a $2.6 billion contract to develop Crew Dragon as a space taxi.

The other company, Boeing, received a $4.2 billion contract to build its own CST-100 Starliner spacecraft, which launches on Atlas V rockets. Boeing expects to launch its first uncrewed Starliner test in April.

You can find a timeline of NASA events for SpaceX's Crew Dragon Demo-1 flight here.