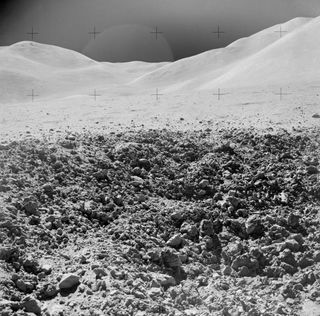 A close-up view of a portion of a "relatively fresh" crater, photographed by the Apollo 15 mission during a lunar surface extravehicular activity (EVA) on Aug. 2, 1971, near Scarp Crater.
(Image: © NASA/JSC)

NASA wants to practice for a potential future human mission to Mars by investigating how astronauts would fare on the moon, but that means knowing the ins and outs of our silver celestial companion like never before. The space agency's Artemis program is working on getting a crew back to Earth's natural satellite by 2024, and to make that endeavor successful, NASA will send scouting experiments to the moon.

In a statement published last Monday (July 1), NASA detailed the dozen payloads heading to the moon as part of their Commercial Lunar Payloads Services project, which could go into space as early as next year. "Each demonstrates either a new science instrument or a technological innovation that supports scientific and human exploration objectives, and many have broader applications for Mars and beyond," Thomas Zurbuchen, associate administrator of NASA's Science Mission Directorate in Washington, said in the statement.

Moondust — also known as lunar regolith — will be the focus of several science experiments.

Related: Here's Where Commercial Landers Will Land on the Moon for NASA

Another payload called RAC (Regolith Adherence Characterization) will look at how lunar regolith sticks to the materials used for spacecraft to see how tacky the moondust gets during different phases of their flight. LISTER (Lunar Instrumentation for Subsurface Thermal Exploration with Rapidity) will glean a deeper look at the dust when it drills 7 to 10 feet (2 to 3 meters) down to measure the temperature under the moon's surface.

To survey and map the lunar terrain, another payload called MoonRanger will regularly travel beyond its lander's communications range, up to 0.6-mile (1 kilometer) away. A flexible camera system called Heimdall will help model the properties of the regolith, and characterize potential landing spots and geologic features. Another imaging system is the L-CIRiS (The Lunar Compact InfraRed Imaging System), which will measure infrared wavelengths of light to determine the surface's composition and temperature distribution.

Electromagnetic activity on the lunar surface will be analyzed by LuSEE (The Lunar Surface Electromagnetics Experiment). This system also uses repurposed parts originally built as part of other NASA missions, like the Parker Solar Probe FIELDS experiment and the MAVEN mission to Mars. To gain a big-picture perspective on the electric and magnetic fields, the Lunar Magnetotelluric Sounder payload will characterize the Moon's melted interior, known as the lunar mantle. The Sounder, too, will use a spare MAVEN part.

Our planet's atmosphere cocoons living things from the harmful effects of solar radiation, but that threat is a major health risk to consider for humans traveling off the Earth. This radiation can also damage computers, and so the Lunar Demonstration of a Reconfigurable, Radiation Tolerant Computer System will test a technology to withstand the harsh environment.

The charged particles that beam from the sun, known as solar wind, will also be the target of LEXI (The Lunar Environment heliospheric X-ray Imager), which will capture images of how the solar wind interacts with Earth's much stronger magnetosphere.

But it's not all about the moon: Scientists also want to better understand the relationship between our blue planet and the moon. Once on the moon, NGLR (Next Generation Lunar Retroreflectors) will be a target for lasers on Earth to ultimately make precise measurements of the distance between the two celestial bodies.