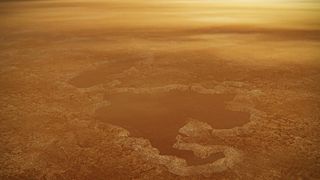 This artist's concept of a lake at the north pole of Saturn's moon Titan illustrates raised rims and rampartlike features such as those seen by NASA's Cassini spacecraft around the moon's Winnipeg Lacus.
(Image: © NASA/JPL-Caltech)

Some of the lakes on Saturn's huge moon Titan may sit in craters blasted out by liquid-nitrogen bombs, a new study suggests.

Titan, the second-largest moon in the solar system, is the only cosmic body beyond Earth known to host stable bodies of liquid on its surface. But Titan's lakes and seas are full of methane, not water. Indeed, the moon's weather system is hydrocarbon-based, with liquid ethane and methane raining from the skies and coursing through canyons to countless reservoirs. (Titan also probably has a subsurface ocean of liquid water, giving the moon two very different, potentially life-hosting environments.)

A leading theory of Titan-lake formation posits that many of these bodies were carved by liquid methane, which dissolved the moon's bedrock of water ice and organic compounds. This process is known to occur in places here on Earth where water eats through limestone substrate, forming "karstic lakes."

But some of the smaller lakes — ones measuring just tens of miles across — near Titan's north pole have steep sides with tall rims that reach high into the moon's sky, radar imagery by NASA's Cassini spacecraft has shown. That profile doesn't fit the karstic model, authors of the new study said.

"The rim goes up, and the karst process works in the opposite way," lead author Giuseppe Mitri, of Italy's G. d'Annunzio University, said in a statement.

"We were not finding any explanation that fit with a karstic lake basin," Mitri added. "In reality, the morphology was more consistent with an explosion crater, where the rim is formed by the ejected material from the crater interior. It's totally a different process."

Mitri and his colleagues may have figured out what this process is, they report in the new study, which was published today (Sept. 9) in the journal Nature Geoscience.

Though Titan is extremely chilly today, with average surface temperatures around minus 290 degrees Fahrenheit (minus 179 degrees Celsius), the moon has been even colder in the past.

Scientists think that the moon has gone through warming and cooling periods over the last billion years or so, as levels of atmospheric methane — a potent greenhouse gas — have waxed and waned. During Titan's "ice ages," nitrogen likely rained from the skies and collected in subsurface pools, study team members said.

This liquid nitrogen was a bomb just waiting to go off. And temperature increases could have lit the fuse, causing the nitrogen to vaporize, expanding quickly in a crater-gouging explosion, study team members said.

"These lakes with steep edges, ramparts and raised rims would be a signpost of periods in Titan's history when there was liquid nitrogen on the surface and in the crust," co-author Jonathan Lunine, of Cornell University in New York, said in the same statement.

Cassini studied Saturn and its many moons up close from 2004 through September 2017, when the low-on-fuel probe performed an intentional death dive into the ringed planet's thick atmosphere. The new study shows that discoveries will continue to flow from the mission, even though the spacecraft itself is gone, Cassini team members said.

"This is a completely different explanation for the steep rims around those small lakes, which has been a tremendous puzzle," Cassini Project Scientist Linda Spilker, of NASA's Jet Propulsion Laboratory in Pasadena, California, said in the same statement.

"As scientists continue to mine the treasure trove of Cassini data, we'll keep putting more and more pieces of the puzzle together," added Spilker, who wasn't part of the study team. "Over the next decades, we will come to understand the Saturn system better and better."