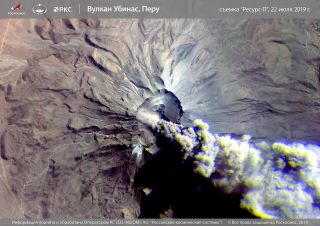 Russia's Resurs-P satellite has captured Peru's most active volcano in the middle of an eruption that affected thousands of people.
(Image: © Roscosmos)

A Russian remote sensing satellite has captured a striking new image of Peru's most active volcano, called Ubinas, in the middle of an eruption that has affected thousands of residents.

The column of ash billows from the volcano in the unmistakable image captured by a Resurs-P satellite, which the Russian space agency, Roscosmos, uses for nonmilitary purposes.

The Resurs-P satellite photographed the #Ubinas volcano, which has been active during the last few days.According to the media, the column of hot ash, smoke and lava stones from the crater is 12 km high, drifting with the wind in all directions. pic.twitter.com/3z9qc4OksYJuly 24, 2019

Peru's Ubinas volcano began erupting at about dawn last Friday (July 19), spewing ash which has reached areas within a 16-mile (25 kilometers) radius, according to Reuters.

Peru's National Institute of Civil Defense (INDECI) ordered an evacuation of the area near the volcano, located north of Moquegua, in southern Peru, according to Reuters. People used masks and goggles to protect themselves from the billowing ash.

On Sunday (July 21), two days after the eruption began, the Geophysical Institute of Peru (IGP) issued an "orange warning," meaning there was still a chance that the volcano might erupt again and emit more ash. As of Monday (July 22), the eruption had affected 29,703 people and had damaged 637 public buildings and homes, the Peru National Emergency Operations Center reported.

Today, IGP officials said the volcano may still expel ash or erupt. Ubinas volcano is one of a dozen active volcanoes in the region that are a part of the "Ring of Fire," a horseshoe-shaped stretch of land that's known for frequent earthquakes and volcanic eruptions.