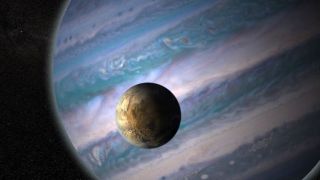 What do you call a runaway exomoon with delusions of planethood? You call it a "ploonet," of course.

Scientists had previously proposed the endearing term "moonmoons" to describe moons that may orbit other moons in distant solar systems. Now, another team of researchers has coined the melodious nickname "ploonet" for moons of giant planets orbiting hot stars; under certain circumstances, these moons abandon those orbits, becoming satellites of the host star.

The former moon is then "unbound" and has an orbit like a planet's — ergo, a ploonet.

Ploonets — and all exomoons, for that matter — have yet to be detected. But ploonets may produce light signatures that planet-hunting telescopes could identify, researchers reported in a new study. Their findings were published June 27 in the preprint journal arXiv and have not been peer-reviewed.

For the study, the scientists created computer models to test scenarios that might transform a planet-orbiting moon into a star-orbiting ploonet. The researchers found that if a moon is circling a type of exoplanet known as a "hot Jupiter" — a massive gas giant close to a star — the gravitational tug of war between star and planet could be powerful enough to wrest the moon from its planetary orbit and send the object circling around the star instead.

Orbiting a nearby star would be stressful for a tiny ploonet; during its transit, the ploonet's atmosphere could evaporate and the world would lose some of its mass, creating a distinctive signature in the light emitted from the star's vicinity, the study said. That's the signature that telescopes might be able to detect.

In fact, recent observations of mysterious light emissions around faraway hot stars could be explained by the appearance, and drawn-out deaths, of wayward ploonets, the study said.

Some ploonets could sustain their orbits for hundreds of millions of years. By accreting material from the disk of dust and gas around its star, a ploonet could even build up its body until it eventually became a small planet, the study authors wrote.

However, most ploonets would likely be relatively short-lived, the simulations showed. The majority of the endearingly named objects disappeared within a million years and never became planets; instead, they disintegrated during collisions with their former host planets, were gobbled up by stars in acts of "planetary cannibalism" or were ejected from orbit into space, the researchers reported.