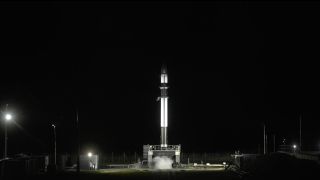 Rocket Lab initially hoped to launch the Electron's mission, called "Look Ma, No Hands," from the Māhia Peninsula during a 100-minute window that opened at 8:57 a.m. EDT (1257 GMT), but ground winds were just too strong.

"We are standing down from today's launch attempt due to weather. Surface level winds are 30% over limit," Rocket Lab representatives wrote in a Twitter update. "We have plenty of back up opportunities in the coming days though. A new target launch day/time will be advised soon."

Rocket Lab is targeting a launch on Monday (Aug. 19) at 8:12 a.m. EDT (1212 GMT). The Huntington Beach, California-based company has a 14-day window in which to launch the mission.

The upcoming launch will mark the eighth flight of a Rocket Lab Electron, a 57-foot tall (15 meters) booster designed to launch small satellites into low-Earth orbit. The rocket is optimized to launch payloads of up 500 lbs. (227 kilograms), and can haul multiple tiny, boxy cubesats at a time. There are four cubesats riding aboard the "Look Ma, No Hands" mission.

Electron's payload includes an ocean-monitoring cubesat for the French company UnseenLabs, which aims to build a network of the "maritime surveillance" satellites for customers on Earth. Another Earth-imaging satellite, the BlackSky Global-4, is also part of a growing satellite network for the Seattle-based company BlackSky.

The final two cubesats are prototypes built for the U.S. Air Force Space Command to test new technologies in orbit.

Editor's note: This story has been updated to include the new launch date for Rocket Lab's "Look Ma, No Hands" mission.