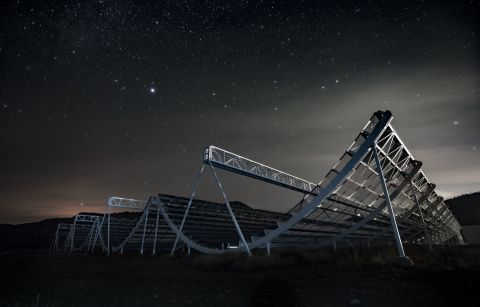 As the young universe settled into its current form, flip-flopping hydrogen atoms fired off countless flashes of light — all at the same wavelength of about half the height of a bowling pin. Eons later, those photons have been stretched to varying lengths by the expanding cosmos and some have found their way to Canada, where a specialized radio telescope waits to intercept them.

The Canadian Hydrogen Intensity Mapping Experiment (CHIME) is an instrument of cosmic ambitions. Researchers designed CHIME to demystify dark energy — the phenomenon driving the universe's expansion — by creating the first detailed map of a previously impenetrable stretch of history.

"It's a window you can't observe using other methods," said Kiyoshi Masui, an astrophysicist at the Massachusetts Institute of Technology. "We're going after a time that no one else can."

Almost by coincidence, CHIME may also help to resolve one of astronomy's greatest contemporary mysteries: the origin of the extragalactic explosions known as fast radio bursts (FRBs).

Motorists driving through the arid foothills of southern British Columbia may spot signs asking them to power down their cellphones as they pass the Dominion Radio Astrophysical Observatory, which houses CHIME and other scientific instruments. When eavesdropping on photons from across the universe, there's no such thing as too quiet.

The radio telescope CHIME listens with four half-pipe-shaped "ears" collectively spanning an area as long as a football field and half as wide. The receivers point straight up, covering much of the sky, and rely on the Earth's movement to sweep them across the universe.

This mechanical simplicity belies a devilish digital complexity. While most radio telescopes have fewer than a dozen antennas, CHIME is packed with 1,000 of them. Snapping an image requires contrasting each antenna's signal with those of every other antenna, a computationally costly practice called interferometry. CHIME's real power lies here, with thousands of processors that reduce the data fire hose to a manageable drip of about 1 terabyte daily.

"What we've done is replace mechanical cost with digital cost," Masui told Space.com, "and that makes for a very economical telescope." The Canadian government funded the interferometer in 2012 for about $12 million Canadian dollars ($9 million), a comparative bargain in the field of astronomy.

That price bought an instrument with a mapping speed that was 10 to 100 times faster than any other, according to Masui. Featuring high resolution, a panoramic field of view and excellent low-light performance, CHIME would make an ideal camera — if it saw visible light rather than 400- to 800-megahertz radio waves.

The completed telescope took its first measurements in September, 2017, and testing continued in earnest through 2018. The instrument began operating at full capacity in early 2019 and will eventually observe the sky day and night.

An ancient map of everything

CHIME's primary purpose is to map the visible matter of the cosmos on the grandest of scales and learn something about the forces that push that matter around. Rather than plotting individual galaxies, the instrument sees only the universe's most abundant building block: hydrogen.  The atom may be small, but, from our distant perspective, hydrogen’s relative omnipresence makes it a good proxy for all normal matter, from stars to galaxies to galaxy clusters.

"The smallest elements we can see represent hundreds of thousands of galaxies," said Richard Shaw, an astronomer at the University of British Columbia in Vancouver, Canada.

A dim galaxy cluster that is close by looks like a bright cluster in the distance, so to add depth to its map, CHIME will exploit a cosmological quirk. The universe started out as a thick, soupy plasma rumbling with ripples; after 300,000 years, that soup cooled, and hydrogen atoms formed, freezing the primordial reverberations in place. CHIME will hunt for the leftover concentrations of mass, which show up today as rings of galaxies and hydrogen about a billion light-years across.

By combining the evolution of these ancient halos with information about the extent to which the photons stretched while en route to Earth, researchers will generate the largest volume map of the universe to date, one that shows how quickly the cosmos expanded and when, Shaw told Space.com.

The ultimate goal is to distill statistics that could rule out certain hypotheses about dark energy. For that reason, the experiment focuses on hydrogen atoms that flickered 2.6 billion to 6.8 billion years after the Big Bang. "That's when dark energy first became important," Masui said, "at the very beginning, when the expansion of the universe deviated from what we thought would happen."

Dark matter models won't be the only hypotheses ruled out by CHIME's observations. The interferometer can also scan for fleeting cosmic blasts discovered while the telescope was still in the planning stages.

The first FRB was detected in 2007, but it took a few years for researchers to agree that the impossibly bright radio flashes weren't of Earthly origin. Today, astronomers have cataloged dozens of these bursts, which wink on and off in thousandths of a second. The flashes dot the sky, perhaps thousands of times each day and come from all over the universe, but what sets them off remains unknown.

Shortly after CHIME received funding, astronomers and cosmologists met in Quebec in 2014 for an annual conference about cosmology and gravity organized by the Canadian Institute for Advanced Research. The group realized that CHIME's ability to search the whole sky at once would be ideal for detecting the ubiquitous and unpredictable radio explosions. Two years later, the government funded a CA$6 million ($4.5 million) computing cluster dedicated to searching CHIME's data for FRBs in real time. "It was a miracle of Canadian radio astronomy," Masui said.

Even before coming fully online, the telescope changed the FRB landscape. In early 2019, the collaboration published 13 new detections — including the second example of a repeating burst, a collection of FRBs all coming from the same place — increasing the number of known events by 25 percent. CHIME recorded the flashes over four weeks, but discounting debugging and calibration time, Masui estimates that the telescope was fully operational for just five days during that period.

The new findings, especially the repeater burst, have already helped astronomers refine certain theories, but researchers will need many more observations before they can zero in on a conclusive explanation for FRBs. "The first 200 or 1,000 [examples] will rule out a large number of models," Masui said. "But there are many dozens of models that work well. Even if you get rid of three- quarters [of them], there will still be a bunch that work."