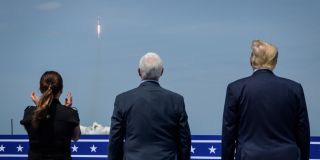 The president's reelection campaign released the 2.5-minute video on Wednesday (June 3) but pulled it just a day later, after widespread criticism that it improperly politicized NASA and violated the agency's advertising regulations on the depictions of astronauts.

But while the ad's burial was noteworthy, its birth was even more so, said space policy expert John Logsdon.

"If that had run [long-term], a nearly three-minute video — there certainly would have been nothing like that before," Logsdon, a professor emeritus of political science and international affairs at George Washington University's Elliott School of International Affairs in Washington, D.C., told Space.com.

"Space has never been a campaign issue," he said. "So, there's never been any reason for a candidate to advertise his or her support for the space program as a way to get elected."

(John F. Kennedy did campaign on the "missile gap" between the United States and the Soviet Union in the leadup to the 1960 presidential election, Logsdon noted. But space was just a tangential component of that appeal, which was concerned primarily with national defense.)

The short-lived video highlighted the Trump administration's push for a crewed moon landing by 2024, which NASA is working to achieve via its Artemis program. The ad also celebrated the successful May 30 launch of SpaceX's Demo-2 mission, the first orbital human spaceflight to depart from the United States since NASA retired its space shuttle fleet in July 2011.

Demo-2 sent NASA astronauts Bob Behnken and Doug Hurley to the International Space Station (ISS) on board a SpaceX Crew Dragon capsule. The two spaceflyers will live on the orbiting lab for one to four months; NASA has not yet announced how long their mission will last.

SpaceX developed Crew Dragon with funding help from NASA's Commercial Crew Program, which was established in 2010 to groom private spacecraft to fill the space shuttle's shoes. In 2014, SpaceX and Boeing won multibillion-dollar commercial crew contracts to finish work on their astronaut taxis (Boeing's is a capsule called CST-100 Starliner) and fly six operational missions to the ISS. SpaceX can start conducting those contracted missions if all continues to go well with Demo-2.

The "Make Space Great Again" video did not reference the 10-year history of commercial crew, which began during the presidency of Barack Obama.

"One of the things the ad reminded me of was Richard Nixon at the time of Apollo 11. Nixon had nothing to do with Apollo 11, but he wrapped himself in all the celebrations — went out to the carrier and all of that — and never once mentioned Kennedy," said Logsdon, who has written books about the space policies of both Nixon and Kennedy. (The aircraft carrier U.S.S. Hornet fished the Apollo 11 astronauts out of the Pacific Ocean after their mission-ending splashdown on July 24, 1969, and ferried the trio back to shore.)

"And in the same way, Trump seemed to intimate that he was responsible for commercial crew, and that nothing that happened before had any impact," he added.

This is not to imply, however, that Trump's interest in space is feigned or insincere; all indications point to the president being "very positive on the space program," Logsdon said. For example, the White House's 2021 budget request allocates $25.2 billion to NASA, a 12% bump that would be the biggest year-over-year increase for the agency in decades. (A big chunk of the money would go toward making that 2024 moon landing happen.)

"He's got a good group of people that see space as an important national issue," Logsdon said.

The pulled campaign ad showed Demo-2 astronauts Behnken and Hurley, as well as the NASA logo. That appeared to violate NASA regulations, which prohibit using the agency's logo and the likenesses of current astronauts for marketing purposes.

Behnken is married to fellow NASA astronaut Megan McArthur, who was briefly visible in the video as well. Hurley's wife, retired NASA astronaut Karen Nyberg, also appears in the ad. Nyberg said via Twitter that she did not consent to this depiction — another apparent violation of NASA regulations. (The rules are slightly different for active versus retired astronauts.)