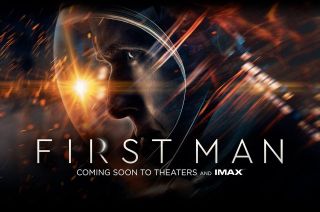 But the first space connection in the Oscars last night (Feb. 24) came right at the show's liftoff: Noted astrophysicist and NASA spokesperson Brian May — who happens to also be the lead guitarist for the band Queen — rocked out to the band's hits "We Will Rock You" and "We Are the Champions" as the show's opening number. May was joined by original Queen member Roger Taylor and Adam Lambert, who has toured with Queen since 2011.

The Queen tribute was appropriate this year because "Bohemian Rhapsody," a biopic of Queen frontman Freddie Mercury, was one of the candidates for 2019 best picture. (It didn't win that award, although it did take home best actor, best sound editing, best sound mixing and best film editing.)

"First Man," for its part, had been nominated for production design, sound editing and sound mixing as well as visual effects. The film, directed by Damien Chazelle and starring Ryan Gosling, followed Apollo's early days leading up to humanity's first steps on the moon. The movie's Paul Lambert, Ian Hunter, Tristan Myles and J.D. Schwalm took the stage to accept the visual effects award.

"It's an honor, it's humbling to honor Neil Armstrong and all the men and women of NASA, so thank you so much!" Ian Hunter said during the broadcast.