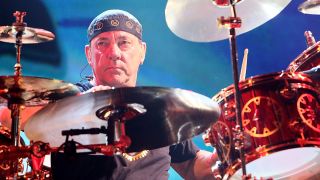 "Suddenly, you were gone, from all the lives you left your mark upon," were the first lyrics I heard after hearing of Neil Peart's passing  Jan. 7 at the age of 67 on social media. The song they come from, "Afterimage," was cosmically the first song that came up in a random shuffle of Rush music that I listened to within moments of hearing the sad news.

Peart wrote the lyrics for that song, which is on Rush’s record Grace Under Pressure, released in 1984. That's the album that started my journey into Rush fandom in my preteen years.

For any Rush neophytes out there, they were progressive rock pioneers, with a career spanning over 40 years. Creating 19 studio albums, 11 live albums and selling over 25 million of them to an adoring and loyal fan base.

Peart not only made his mark as one of the most technical and powerful rock drummers of all-time, but he also wrote the song lyrics for Rush since joining the band for their second record "Fly by Night." Bassist and vocalist Geddy Lee and guitarist Alex Lifeson rounded out this Rock N' Roll Hall of Fame-inducted power trio.

Much of their earlier works were infused with sci-fi and literary concepts. Songs like "Farewell to Kings," "Cygnus X-1," "2112," "Xanadu" and "By-Tor & the Snow Dog" exemplified their desire to revolutionize music.

They went on to have commercial success with songs like "Tom Sawyer," "Big Money," "Subdivisions," "Spirit of the Radio" and more in later years.

Peart also went on to author several books, including "Ghost Rider: Travels on the Healing Road," which chronicled his life after it was marred by tragedy when his 19-year-old daughter died in a car crash and wife succumbed to cancer only 10 months later.

Long motorcycle journeys helped him heal and became a big part of his journey going forward. While his bandmates used tour buses to get from city to city, Peart would hop on his bike to explore the roads and get to the next destination.

Their last studio album "Clockwork Angels," released in 2012, was a return to sci-fi record concept, heavily influenced by steampunk. Peart co-wrote a novel and graphic novel from the story.

Through the years, I personally went on to learn many Rush songs on the bass guitar and have seen the band more times than I can count. The last coming at Madison Square Garden in New York City on their farewell 40th Anniversary Tour in 2015, which Peart said would be his last to spend more time with his new wife and their young daughter. But I, like most fans, was ever hopeful they would eventually reunite.

Sadly, now, that will never come to pass but the memories will live on for all of those who partook in their brilliance.

Rush has asked the public and media to "respect the family's need for privacy and peace at this extremely painful and difficult time," in a social media post. Adding "those wishing to express their condolences can choose a cancer research group or charity of their choice and make a donation in Neil Peart's name."

I personally like to think Neil's soul is 'wheeling through the galaxies, headed for the heart of Cygnus,' like he wrote in the Rush song 'Cygnus-X1 Book Two: Hemispheres' ... in an untethered exploration of the Universe.

Rest in Peace, Sir. You left your mark.