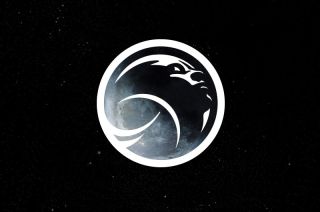 NASA's new Woman on the Moon artwork features a portrait of the Greek goddess Artemis illustrated in the highlights and shadows of the crescent Moon topography.
(Image: © NASA)

The space agency on Wednesday (Oct. 23) revealed new artwork symbolizing its Artemis program to send the first humans to the moon since the Apollo astronauts 50 years ago. In Greek mythology, the goddess of the moon, Artemis, was the twin sister of Apollo.

"The Artemis logo looks, quite frankly, like a modern version of the traditional Apollo logo," said NASA Administrator Jim Bridenstine, speaking to an audience of young professionals and college students as part of a panel discussion at NASA Headquarters in Washington, DC on Wednesday. "The new Artemis logo came from that inspiration and if you look at the [Apollo] logo, you can tell we are going from the Earth, in fact, to the moon."

Related: Who Will Be the First Woman on the Moon?

Referencing the Apollo program logo, Bridenstine drew attention to its depiction of the moon, an illustration that includes the profile of a man's face.

The new artwork features a portrait of Artemis such that her profile is formed from the highlights and shadows of the crescent moon's topography.

"There are a lot of different ways to interpret this," he continued. "I just think it is magnificent."

Artemis' face is purposely abstract so that "all women can see themselves in her," NASA describes on its website.

NASA's Artemis program has the goal of landing the first astronauts at the moon's south pole by 2024. Though the initial missions will be short in duration, the space agency intends to establish a long-term, sustainable presence on the lunar surface to prepare for sending future astronauts to Mars.

The Artemis crew will also include the first woman to walk on the moon.

The new art does not replace the Apollo-inspired Artemis program logo that NASA revealed in July, but it is meant to be used with it and to emphasize that Artemis, as the literal and figurative "torch bringer," will light NASA's way to the red planet.

"I just think that this image, created by so many great people at NASA, represents a new generation … the Artemis Generation," said Bridenstine.