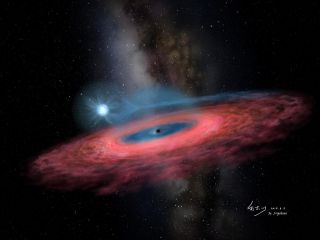 A Chinese-led team discovered a stellar-mass black hole that appears to be 68 times heftier than Earth's sun — nearly three times bigger than the heaviest such objects should be, according to current thinking.

Calculations suggest that the Milky Way galaxy's stellar-mass black holes — which form after the violent deaths of giant stars — should top out at only 25 times the mass of the sun, the researchers said. (Supermassive black holes that lurk at the hearts of galaxies are much bigger, of course, containing millions or billions of solar masses.)

What's more, the huge black hole is also relatively close to Earth in cosmic terms. It sits at 13,800 light-years from our planet — a small fraction of the Milky Way's estimated diameter of 200,000 light-years.

"Black holes of such mass should not even exist in our galaxy, according to most of the current models of stellar evolution," lead author Jifeng Liu, deputy director-general of the National Astronomical Observatories of China at the Chinese Academy of Sciences, said in a statement.

"We thought that very massive stars with the chemical composition typical of our galaxy must shed most of their gas in powerful stellar winds, as they approach the end of their life. Therefore, they should not leave behind such a massive remnant," Liu added. "Now, theorists will have to take up the challenge of explaining its formation."

Most black holes are found via their dramatic activity in X-rays or gamma rays, which are emitted as the behemoths gobble up nearby gas and dust. Liu's team, however, sought out stars that are orbiting inactive black holes, which are apparent only by their gravitational pull. They discovered a star called LB-1, which is eight times the mass of the sun and that appears to orbit a black hole every 79 days, even though the black hole isn't visible. The scientists backed up their observations with data from two other telescopes.

"The discovery of LB-1 fits nicely with another breakthrough in astrophysics," academy representatives added in the same statement. "Recently, the Laser Interferometer Gravitational-Wave Observatory (LIGO) and Virgo gravitational-wave detectors have begun to catch ripples in space-time caused by collisions of black holes in distant galaxies. Intriguingly, the black holes involved in such collisions are also much bigger than what was previously considered typical."

The researchers do acknowledge some caveats with the study, according to Science News. For example, the mass of the black hole depends on its calculated distance. Europe's Gaia space telescope, which precisely measures the movements of a billion stars, has suggested that the distance to this black hole might be only about 7,000 light-years, or roughly half the distance the Chinese team calculated. If that's true, the black hole would be only 10 times the mass of the sun.

That said, the Chinese-led team noted that, if LB-1 were closer, it would be less luminous and less massive — and its observed temperature cannot be explained with less luminosity. Also, the discrepancy with Gaia's data could be explained if the star were excessively wobbling around the black hole, Science News noted.

The new study was published online Wednesday (Nov. 27) in the journal Nature.