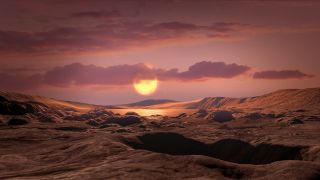 Artist's illustration of what the surface of the newfound exoplanet Kepler-1649c might look like.
(Image: © NASA/Ames Research Center/Daniel Rutter)

Are dozens of intelligent extraterrestrial civilizations lurking right in our home galaxy?

According to a new study, there could be more than 30 civilizations capable of long-distance communication here in the Milky Way. This work, led by researchers at the University of Nottingham, assumed that intelligent life not only exists off-Earth, but develops on other planets similarly to how it does on Earth.

"There should be at least a few dozen active civilizations in our galaxy under the assumption that it takes 5 billion years for intelligent life to form on other planets, as it did on Earth," Christopher Conselice, an astrophysicist at the University of Nottingham who led this research, said in a statement. "The idea is looking at evolution, but on a cosmic scale."

Related: 9 strange, scientific excuses for we haven’t found aliens yet

To estimate the number of intelligent civilizations in our galaxy, the team took into account two major "Astrobiological Copernican limits", or conditions that such an "intelligent" civilization would depend on.

For one of these limiting factors, the researchers used Earth, where life began approximately 4.54 billion years ago, as an example. They assume that intelligent life most likely forms in less than 5 billion years (based on what has happened on Earth).

The second limiting criterion focused on stars. They estimate that a planet with intelligent life would orbit a star like our sun (because life has formed here on Earth, which orbits the sun). This sun-like star would have "a metal content equal to that of the sun … (the sun is relatively speaking quite metal-rich)," Tom Westby, an assistant professor at the University of Nottingham and first author on the paper said in the same statement.

In addition to these two Astrobiological Copernican limiting criteria, the scientists factored in technological capability. The researchers figured that the number of "intelligent" civilizations depends on technological prowess, specifically how long they have been sending out some sort of signal into space (anything from radio transmissions from orbiting satellites to television). So, using our civilization as an example for a potential extraterrestrial one, the researchers estimated that humans have been "technologically advanced" for about 100 years.

Taking these criteria into account and under these numerous assumptions, the researchers made an approximate estimation of the number of intelligent civilizations that could theoretically exist in the Milky Way.

"We calculate that there should be around 36 active civilizations in our galaxy," Westby said. However, the average distance to these alien worlds would be approximately 17,000 light-years, so much too far for humans to contact with existing technologies, according to the researchers.

Despite the new estimate, the researchers acknowledge it's still very possible that we could be alone: If other broadcasting civilizations exist, they might not survive for as long as humankind has and so we might not exist at the same time.

"If we find that intelligent life is common, then this would reveal that our civilization could exist for much longer than a few hundred years; alternatively, if we find that there are no active civilizations in our galaxy, it is a bad sign for our own long-term existence. By searching for extraterrestrial intelligent life — even if we find nothing — we are discovering our own future and fate," Conselice said.

This work was published today (June 15) in the Astrophysical Journal.