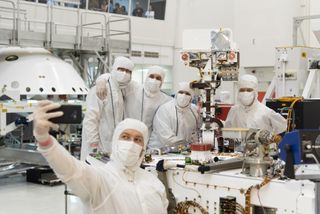 NASA's next Mars rover is really starting to come together.

Engineers at the agency's Jet Propulsion Laboratory (JPL) in Pasadena, California, have installed the headlike mast on the Mars 2020 rover, which is scheduled to launch toward the Red Planet in July of next year.

The robot also now has a suspension system and a set of wheels, both of which were put on Thursday (June 13). The suspension system is permanent, but the wheels will eventually come off; they'll be replaced by the flight models after Mars 2020 makes it to Florida, JPL officials told Space.com via email. (The rover will launch from Cape Canaveral Air Force Station, on Florida's Space Coast.)

Engineers attached the instrument-packed mast on June 5 in a JPL clean room.

"Full integration of the mast — a process that includes installation of science instrument sensors, electrical wiring and checkout — continued into the following week, concluding on June 11," NASA officials wrote in a statement today (June 14).

The 7-foot-tall (2.2 meters) mast will travel to the Red Planet stowed flat against the car-size rover's body. The mast will be raised after Mars 2020 touches down inside Jezero Crater in February 2021.

Jezero hosted a river delta in the ancient past. Mars 2020 will characterize the geology of the area, hunt for evidence of long-dead Red Planet life and perform a variety of other science work. The six-wheeled robot will also collect and cache samples for future return to Earth, though no retrieval mission is on NASA's books as of yet.

Mars 2020 will also test a variety of new exploration technologies. For example, a tiny helicopter will travel with the rover, to help assess the reconnaissance potential of rotorcraft. And one of Mars 2020's instruments will generate oxygen from the Red Planet's thin, carbon dioxide-dominated air — technology that would obviously be useful for future human pioneers.