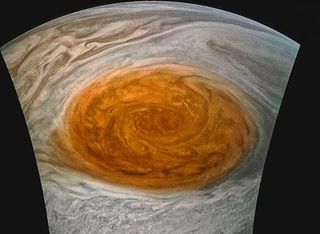 Just a few centuries ago, the famous storm was about three times wider than Earth. But its swirl of angry winds is now comparable in diameter to our home planet, leading to some speculation that the Great Red Spot may be dying.

Some recent research indicates that the vortex that powers the cyclone is still going strong, however. And this notion is bolstered by the new study, which found that the Great Red Spot's thickness has probably remained constant over the past four decades or so, despite the dramatic shrinkage in the storm's areal extent observed over this span.

In the new study, Daphné Lemasquerier of  Aix-Marseille Université in France and colleagues investigated the dynamics of large Jupiter vortices in several different ways. For example, they performed numerical simulations and did laboratory experiments with a salt-water-filled Plexiglas tank that measured 20 inches by 20 inches by 28 inches (50 by 50 by 70 centimeters).

This varied work allowed the scientists to determine the balance of forces that mold big Jovian storms into their pancake-like shapes. This improved understanding, in turn, enabled the researchers to make predictions about individual storms, including how they evolve over time.

"For the Great Red Spot in particular, our predicted horizontal dimensions agree well with measurements at the cloud level since the Voyager mission in 1979," the researchers wrote in the new study, which was published online today (March 16) in the journal Nature Physics. (NASA's twin Voyager 1 and Voyager 2 spacecraft both flew by Jupiter in 1979.)

The scientists also predicted that the Great Red Spot is about 105 miles (170 kilometers) thick, and that this thickness hasn't changed much since the Voyagers came through.

Those thickness predictions are tougher to test, because storm height is difficult to observe in Jupiter's opaque atmosphere. But NASA's Juno probe, which has been orbiting the huge planet since July 2016, has the ability to do it, study team members said. Juno is peering deep into Jupiter's thick atmosphere with a variety of instruments, after all, seeking clues about the planet's composition, formation and evolutionary history.

"Our results now await comparison with upcoming Juno observations," Lemasquerier and her colleagues wrote in the new study.