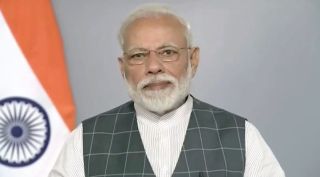 WASHINGTON — The Indian government announced March 27 it successfully fired a ground-based anti-satellite weapon against a satellite in low Earth orbit, a test that is likely to heighten concerns about space security and orbital debris.

Indian Prime Minister Narendra Modi said that the country's military successfully demonstrated an anti-satellite (ASAT) weapon in a test known as "Mission Shakti." In that test, a ground-based missile, a version of an existing ballistic missile interceptor, hit a satellite at an altitude of about 300 kilometers.

"It shows the remarkable dexterity of India's outstanding scientists and the success of our space programme," Modi said in a series of tweets announcing the test. Modi also made a televised announcement, in Hindi, about the test.

Related: The Most Dangerous Space Weapons

According to a statement from India's Ministry of External Affairs, the missile was launched from the Dr. A P J Abdul Kalam Island launch complex in the northeast part of the country. The missile struck an unidentified Indian satellite. "The test was fully successful and achieved all parameters as per plans," the ministry stated.

Neither Modi nor the ministry identified the satellite targeted by the test. Indian media speculated that the likely targets were either Microsat-R, launched in January, or Microsat-TD, launched a year earlier. Microsat-R is in a 262-by-280-kilometer orbit, while Microsat-TD is in a 353-by-361-kilometer orbit, according to tracking data by the U.S. military.

The ministry said in its statement that the test was designed to minimize long-lived debris. "The test was done in the lower atmosphere to ensure that there is no space debris. Whatever debris that is generated will decay and fall back onto the earth within weeks." It wasn't immediately known how much debris the test generated, but some debris may end up in higher orbits with longer decay times.

The test makes India the fourth country, after the United States, Russia and China, to test an ASAT weapon. Modi and his government said that the test both demonstrated the capabilities of India's overall space program as well as showed its willingness to defend its satellites against attacks.

"The test was done to verify that India has the capability to safeguard our space assets," the ministry said in its statement. "It is the Government of India's responsibility to defend the country's interests in outer space."

"India stands tall as a space power!" Modi declared. "It will make India stronger, even more secure and will further peace and harmony."

The test, though, could increase concerns about the security of space assets in general. A February report by the Defense Intelligence Agency highlighted efforts by China and Russia to develop ASAT capabilities, including both ground-based missiles and other technologies, although neither country has performed a debris-generating test since China destroyed one of its own satellites with a ground-based missile in 2007, generating a large amount of debris that triggered international criticism.

The United States performed its own similar test in February 2008, destroying the USA 193 satellite using a modified version of a ship-based SM-3 missile in a test called Operation Burnt Frost. The satellite was in an orbit about 250 kilometers high when it was successfully intercepted, and the U.S. government, which announced the test in advance, said it was designed to minimize the creation of debris. Most of the debris from that test did reenter within weeks, although the last piece of debris tracked from that test remained in orbit until late 2009.