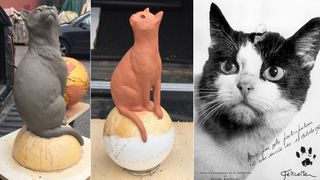 Félicette, the first cat in space (seen here at right), will soon be immortalized as a bronze sculpture at the International Space University in Strasbourg. On the left here is one of the first photos of the artwork in progress, and at the center is a small scale model.
(Image: © Gill Parker/Kickstarter/CNES)

Fifty-six years after a cat named Félicette became the first feline to launch into space, plans to build the cosmic cat's first proper memorial are beginning to take shape.

In 2017, a Kickstarter campaign raised more than $57,000 to build a statue of Félicette commemorating her historic mission. After a long search, the campaign's organizers have finally found a permanent home for the memorial. And last week, they shared the first photos of the statue's new design, featuring an out-of-this-world (literally) replica of Félicette.

The new photos show a clay model of what will eventually be the bronze sculpture of Félicette sitting on top of planet Earth and gazing up at the stars. It's still a work in progress, and in order to keep the statue from toppling over on its round bottom, the planet's Southern Hemisphere has been temporarily set aside. The final product will be around 69 inches (175 centimeters) tall, and it will be displayed at the International Space University in Strasbourg, France.

Related: A History of Animals in Space (Infographic)

The project's founder, Matthew Serge Guy, originally planned to have Félicette perched on top of the French Véronique AG1 rocket that launched her into space on Oct. 18, 1963. While the sketches of the original design were adorable, the idea turned out to be a bit less practical in three dimensions.

"The Véronique rocket that Félicette flew upon was very very tall, and very very thin," Guy wrote in an update on Kickstarter. "If we maintained that same width-to-height ratio, with the rocket podium for Félicette at a height of just over a meter, it would resemble a very narrow pole that a slightly larger-than-life sized cat could barely fit on top of."

Aside from the practical issues, having a rocket as the base of Félicette's statue also presented a bit of a moral dilemma. "Félicette was literally placed into the tip of a rocket against her will," Guy said. "So, memorializing her with a bronze showing more-or-less the same thing felt in some ways insensitive."

The artist, the award-winning British sculptor Gill Parker, came up with the idea to set Félicette on top of a globe instead of the rocket. Then she got to work sculpting a 6-inch (15 cm) maquette, or scale model, to "sketch" the concept in 3D. Small-scale replicas of the statue like this one will eventually be available for purchase, Guy told Space.com. Because bronze is expensive, however, he is working to find a cheaper material to make them more affordable.

Guy also originally planned to place the memorial somewhere in Paris, Félicette's home town. (She was a stray there before the French space agency picked her up and started training her for spaceflight.) But finding a suitable public venue for the memorial within the city turned out to be more difficult than expected.

Thankfully, with a little help from the French space agency CNES and the European Space Agency, they were able to find a home for Félicette at the International Space University. Félicette will be in the Pioneer's Hall there, where she will share a room with a bust of Yuri Gagarin, the first man in space.

Exactly when Félicette's statue will be completed and unveiled at its new home is yet to be determined, as it depends on the sculptor's busy schedule, but we'll post an update here on Space.com when we find out more!