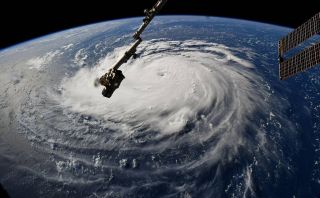 This image of Hurricane Florence swirling on Earth, shared by NASA astronaut Ricky Arnold, was taken from the International Space Station on September 10, 2018.
(Image: © NASA)

Here on Earth, hurricanes are often associated with warm, wet climates. But according to simulations in a new study, these swirling storms can also form on cold, dry exoplanets.

Because they are linked with tropical climates, hurricanes on Earth are often referred to as tropical cyclones. These storms usually form above tropical oceans and move toward nearby shores.

However, the new simulations show that, theoretically, those tropical conditions aren't necessary for hurricanes to form.

Related: Photos: Most Powerful Storms of the Solar System

"Our existing physical understanding for how hurricanes work has never explicitly depended on water (and clouds and rainfall), yet that has long been the prevailing view, given that this is how hurricanes work on the real Earth," study co-author Dan Chavas, an assistant professor in the Purdue University Department of Earth, Atmospheric and Planetary Sciences, told Space.com in an email.

"And this new study shows that this is true: Hurricanes don't explicitly depend on water and warm temperatures; cool and dry climates are also capable of housing these storms."

Scientists search for and study exoplanets using their understanding of life and environments that support life on Earth. On our planet, hurricanes evaporate water, which gives them "energy" to move. So, once a hurricane hits dry land, it will start running out of water to evaporate, and the storm will begin to peter out. But the new study shows, in a drier environment, it is possible for frequent, weak hurricanes to form.

An improved understanding of climate systems on Earth could help scientists study planets far from home. However, Chavas, who noted that he is not an exoplanet expert, said that, so far, scientists haven't observed any exoplanets, regardless of their climates, that experience hurricanes.

"Solar system planets might harbor similar dynamics, but vortices on Mars, Jupiter, and Saturn are probably mostly different phenomena than what we studied. Note that purely dry storms would be very hard to see directly from space because they don’t have clouds!" lead author Timothy Cronin, an assistant professor of atmospheric science at MIT, said in an email to Space.com

In the new study, Chavas and Cronin used a computer model to simulate an atmosphere and generate hurricanes. They tweaked the system so that it sometimes ran as if the hurricanes were happening over a warm ocean (a typical scenario) and sometimes ran with cooler temperatures or a drier environment.

Chavas and Cronin used the model with extreme temperatures and conditions. The coldest simulations ran at a frigid minus 28 degrees Fahrenheit (minus 33 degrees Celsius). The scientists were shocked to find that, at these freezing temperatures and in a dry environment, the simulation produced a large number of hurricanes, although these cyclones were weaker than storms on Earth.,

In addition, Chavas and Cronin found that both cold temperatures and dry environments yielded similar results: frequent, weak hurricanes. Air holds about 100 times less water at minus 28 F than at the temperatures at which tropical cyclones typically form. So when the temperature drops that low, the water in the air "no longer has an effect on the motions within the atmosphere — it's the same as if the atmosphere were totally dry (and full of nearly dry hurricanes)," Chavas said.

The study was published July 10 in the Journal of the Atmospheric Sciences.