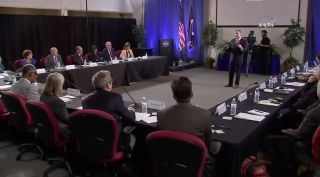 NASA Administrator Jim Bridenstine briefing the NASA Advisory Council at a 2018 meeting. The council is one of a dozen advisory groups the agency currently has, but an executive order could lead it to close several of them.
(Image: © NASA TV)

WASHINGTON — An executive order calling for an across-the-board reduction in federal advisory groups could force NASA to shut down several of the committees that support the agency.

The June 14 order from President Trump instructed all federal agencies to review their existing committees that operate under the Federal Advisory Committee Act (FACA). That act, nearly a half-century old, governs the management of committees that provide advice to government agencies, including requirements for public meetings and reporting of their activities.

The order directs agencies to review their existing committees and, by Aug. 1, submit to the director of the Office of Management and Budget (OMB) recommendations about what committees should continue to operate and which should be terminated. The OMB director will then forward a final list of committees that should be terminated to the president one month later.

"Each agency shall, by September 30, 2019, terminate at least one-third of its current committees established" under the relevant section of the FACA, the order states, with a particular emphasis on those that have achieved their goals, are obsolete, have had their work taken over by another organization or whose cost "is excessive in relation to the benefits to the Federal Government."

NASA hasn't provided any details about how it will carry out that review, and whether any committees will be exempt from the review. The agency can also seek exceptions from the requirement to terminate at least a third of its committees if "it is necessary for the delivery of essential services, for effective program delivery, or because it is otherwise warranted by the public interest."

"We will review the advisory committees at NASA in accordance with the executive order and report back to the White House later this summer on any efficiencies we believe are found as part of the internal assessment," Bettina Inclán, associate administrator for the office of communications at NASA, said in a statement to SpaceNews. "Until then it would be premature to address any one specific committee."

Retired Air Force Gen. Les Lyles serves on two of those 12 committees run by NASA. He is chair of the NASA Advisory Council and a member of the National Space Council's Users' Advisory Group. In a June 18 speech at a Maryland Space Business Roundtable luncheon, he said the council in particular was effective in providing advice to NASA.

Lyles cited a study mandated by Congress in a 2017 NASA authorization bill to examine the effectiveness of the council. That report, published in June 2018 by the National Academy of Public Administration, offered a favorable assessment of the council's work. It provided a number of recommendations for the council, while noting that those recommendations "generally affirm current NASA practice."

"For the NAC, I will say the jury is very positive about that," he said, likening the report's conclusions to a letter grade of A or A–.

He said it's still too soon to assess the Users' Advisory Group, which held its first public meeting one year ago and met twice since then, most recently April 8 in Colorado Springs. Lyles said he expects the group to, among other things, "take another deep look into" NASA's Artemis program to return humans to the moon by 2024, an analysis that would be in addition to reviews within the agency and by the NASA Advisory Council.

"We're still feeling our way around a little bit as to what our role is going to be," he said of the group. "I think it's very, very clear that there is an opportunity for some good things to come out of the expertise that resides in that advisory group. We're all anxious and ready to go."