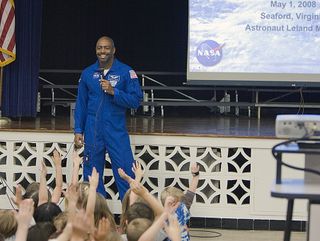 During a hearing this week held by the House Science, Space and Technology Committee, congressional representatives questioned the wisdom of cutting NASA's education arm, as President Donald Trump's budget request for the year beginning in October proposes to do.

The budget request, which proposes to scrap the agency's Office of Science, Technology, Engineering and Mathematics (STEM) Engagement, released Monday (March 11) is the second consecutive attempt by the executive branch to defund the office, which nevertheless received $110 million for the 2019 calendar year. (The president's budget request represents only the executive branch's priorities; money is  appropriated by Congress.) Questions representatives raised during the first space hearing of the new House Science, Space and Technology Committee, held yesterday (March 13), suggest Congress may again push back against defunding the office.

The panel included two notable STEM education advocates: Ellen Stofan, who is director of the Smithsonian National Air and Space Museum and former chief scientist for NASA, and Peggy Whitson, who clocked the most days in space of any NASA astronaut. Both spoke in favor of keeping NASA involved in structured STEM outreach programming.

"I really think it's important for us to be educating our young people and giving them the motivation and the desire to be part of this technology development that we want to happen for our own country," said Whitson, who retired from NASA's space corps in 2018. "I find it difficult to say that we shouldn't do any of it. I know that NASA by inspiration alone will continue that, but I do think there should be mechanisms that exist to definitely beef up our young group of future engineers and astronauts to support our future programs, otherwise we will be at a huge disadvantage compared to the other countries."

Stofan, who sees the museum she directs as another key STEM outreach project, echoed similar sentiments. "When I go out and talk to the aviation and aerospace industry, what I hear from them are huge concerns about future workforce," she said. "These are programs that are shown to have benefit, they reach hundreds of thousands if not millions of kids around this country and inspire them to go into STEM careers — they don't always end up as NASA astronauts, but they may become civil engineers or doctors and go out and contribute."

Pete Olson, R-Texas, also asked about the targeted program during yesterday's committee hearing. "One thing I'm concerned about is having a workforce for the future, which means people getting a STEM education," he said, asking Whitson how to encourage women in the STEM fields in particular.

"I definitely think NASA serves as an inspiration to a lot of our young people," she said. "It's really important that we get to young people and try to show them all the options that are out there, because if they're exposed to these things and see people doing these things where they might be in the future it will inspire them."