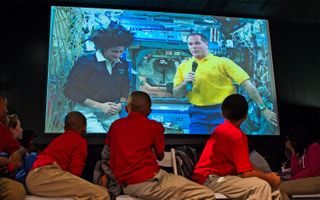 NASA astronauts Suni Williams (left) and Kevin Ford, crewmembers of Expedition 53 to the International Space Station, answer questions from students during a video conference held in honor of International Education Week at the Smithsonian National Air and Space Museum on Nov. 15, 2012, in Washington.
(Image: © Carla Cioffi/NASA)

Carie Lemack is co-founder and CEO of DreamUp, the first company to bring space into classrooms and classrooms into space. A former national security policy expert/advocate and producer of an Academy Award-nominated film, Lemack is a proud alumna of Space Camp and a supporter of all space cadets reaching for the stars. Lemack contributed this article to Space.com's Expert Voices: Op-Ed & Insights.

Frank Lloyd Wright called space "the breath of art." He disrupted architecture — he revolutionized the use of space on Earth — through the buildings he designed. If you want to see a different but no less artistic use of space, look not to Wright's artistic treatment of space, but instead to students using their creativity to design experiments bound for outer space. Look to the heavens to see the latest academic disruption on Earth.

By disruption, I refer to schools throughout the United States that have embraced a "space-centric" approach to teaching science, technology, engineering and mathematics (STEM). Students can now take what they have learned in the classroom and, in partnership with organizations like DreamUp (which has launched 400 student-built payloads to date), conduct experiments aboard the International Space Station (ISS). Never before have so many learners had so much access to the ultimate laboratory, where teachers and students have an emotional stake in what happens to their projects.

This recent expansion in educational opportunities is historic and democratic. The disruption is on par with the rise of the United States' land-grant colleges and the passage of the G.I. Bill of Rights. Land grant colleges were created during or after the Civil War, with a focus on agriculture, science, military science and engineering, to better educate a new and less aristocratic class of students. The G.I. Bill, meanwhile, gave World War II veterans financial assistance to go to college.

Credit for this new disruption in the education industry goes to the ongoing modernization of curricula and a revolution in telecommunications, seen in the widespread use of smartphones, laptops and tablets. We can thank Moore's law for the global adoption of these devices; that law says that an exponential increase in the power of computing leads to a corresponding decrease in the cost of computer technology.

These changes will inevitably alter the direction of educational spending in the U.S., which, according to the National Center for Education Statistics (NCES), currently amounts to $634 billion per year, or $12,509 per public school student enrolled this fall. These changes are part of the same technological forces that connect a multitude of schools across the country.

Change is alive and well at Purdue University in West Lafayette, Indiana. A land-grant university famous for its aviation and aeronautical engineering programs, Purdue is the alma mater of 24 NASA astronauts, including moonwalkers Neil Armstrong and Gene Cernan. "As a student working with the ISS, I was presented with real problems to solve, real consequences for failure and therefore a real reason to learn," Joe Tiberi, one of Purdue's many talented aerospace engineering students, said in a testimonial for DreamUp. Tiberi had the opportunity to design, test and build a science experiment through a program called High Schools United with NASA to Create Hardware (HUNCH).

Like other land-grant colleges, Purdue is an example of how schools are transitioning from one era to the next, as the demands of the industrial age — and the need for factory workers — yield to the importance of the information age, in which factories have fewer workers and employees have specialized skills. This university shows that the best way for a school to stay relevant is to refuse to stay complacent, making changes so that it graduates students fluent in STEM who are eager to explore space.

Accelerating that disruption is critical to modernizing the nation's schools. It requires not only a change in courses but also a change in priorities among grade schools, colleges and universities. Teachers and professors at these institutions need to know — and students need to understand — that the sky isn't even the limit to the science they can accomplish.

Excitement about these possibilities is reason enough for us to prepare ourselves for the changes ahead. Those changes will help the United States stay ahead and go head to head with the scientists, educators and entrepreneurs throughout the world.

Awareness will maintain our readiness, while disruption will ensure we are ready — and able — to meet the challenges of tomorrow. Only then, will we have the Wright stuff to succeed.