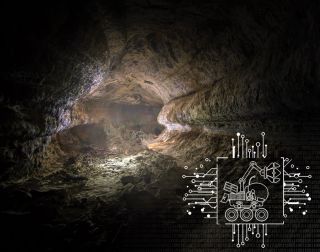 As NASA makes a big push to land humans on the moon's surface by 2024, the European Space Agency (ESA) wants to learn more about the lunar caves that lie beneath.

ESA has released a call for proposals asking for creative ways to design a robotic mission that would explore these caves, which could be related to old underground lava tubes that dried up over the eons and collapsed. The campaign is available on ESA's Open Space Innovation Platform, and submissions are due by Sept. 27.

"Exploring and mapping these tubes could provide new information about the moon's geology, but they could also be an interesting option as long-term shelter for future human visitors to the moon," Franceso Sauro, director of ESA's Pangaea planetary geology astronaut training, said in a statement. "They would shield astronauts from cosmic radiation and micrometeorites and possibly provide access to icy water and other resources trapped underground."

The missions have several scientific objectives associated with them, ESA explained. Future explorers would not only need to access, navigate and map the caves, but may use other resources. Some possible ideas include establishing communications between the cave and "the outside world," ESA said, while others involve instruments that could take measurements of the environment of the cave.

"Mission concepts may be based on a single rover or a distributed system of satellite, robotic or rover systems that operate together," Loredana Bessone, who is leading the hunt for ideas as head of ESA's analog field testing and exploration training, said in a statement. "Either way, we are looking for systems that would land on the lunar surface, identify and access a cave and contribute to the scientific exploration of the moon."

The statement did not say how (if at all) this would relate to NASA's exploration plans to land humans on the surface of the moon in 2024, but NASA has noted that it wants to land on the moon to establish a permanent human presence there. Lunar caves are a possible option to protect astronauts from long-term radiation on the surface, although our only knowledge of them so far comes from pictures of pits spotted from orbit.

Editors Note: This article was updated to reflect that the deadline for submissions is Sept. 27, not Oct. 31.