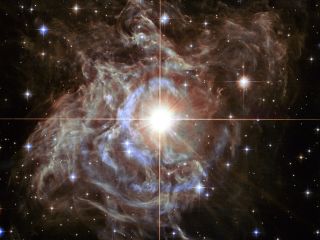 A Hubble Space Telescope image shows RS Puppis, one of the cepheids used to measure the expansion of the universe.
(Image: © NASA/ESA/Hubble Heritage (STScI/AURA)-Hubble/Europe Collab)

That's the conclusion of a new paper published in the journal Physics Letters B, due for print publication April 10. The paper is an attempt to resolve one of the deepest mysteries of modern physics: Why don't our measurements of the speed of the universe's expansion make sense? As Live Science has previously reported, we have multiple ways of measuring the Hubble constant, or H0, a number that governs how fast the universe is expanding. In recent years, as those methods have gotten more precise, they've started to produce H0s that dramatically disagree with one another. Lucas Lombriser, a physicist at the University of Geneva in Switzerland and co-author of the new paper, thinks the simplest explanation is that our galaxy sits in a low-density region of the universe — that most of the space we see clearly through our telescopes is part of a giant bubble. And that anomaly, he wrote, is likely messing with our measurements of H0.

Related: From Big Bang to present: Snapshots of our universe through time

It's hard to imagine what a bubble would look like that's on the scale of the universe. Most of space is just that anyway: space, with a handful of galaxies and their stars scattered through the nothingness. But just like our local universe has areas where matter packs closely together or spreads extra-far apart, stars and galaxies cluster together at different densities in different parts of the cosmos.

"When we look at the cosmic microwave background [a remnant of the very early universe], we see an almost perfectly homogenous temperature of 2.7 K [kelvins, a temperature scale where 0 degrees is absolute zero] of the universe all around us. At a closer look, however, there are tiny fluctuations in this temperature," Lombriser told Live Science.

Models of how the universe evolved over time suggest that those tiny inconsistencies would have eventually produced regions of space that are more and less dense, he said. And the sort of low-density regions those models predict would be more than sufficient to distort our H0 measurements in the way that's happening right now.

Here's the problem: We have two main ways to measure H0. One is based on extremely precise measurements of the cosmic microwave background (CMB), which appears mostly uniform across our universe since it was formed during an event that spanned the entire universe. The other is based on supernovas and flashing stars in nearby galaxies, known as cepheids.

Cepheids and supernovas have properties that make it easy to precisely determine how far away they are from Earth and how fast they're moving away from us. Astronomers have used them to make a "distance ladder" to various landmarks in our observable universe, and they have used that ladder to derive H0.

But as both cepheid and CMB measurements have gotten more precise in the last decade, it's become clear that they don't agree.

"If we're getting different answers, that means that there's something that we don't know," Katie Mack, an astrophysicist at North Carolina State University, previously told Live Science. "So this is really about not just understanding the current expansion rate of the universe — which is something we're interested in — but understanding how the universe has evolved, how the expansion has evolved, and what space-time has been doing all this time."

Some physicists believe that there must be some "new physics" driving the disparity — something we don't understand about the universe that's causing unexpected behaviors.

"New physics would of course be a very exciting solution to the Hubble tension. But new physics typically implies a more complex model that requires clear evidence and should be backed by independent measurements" Lombriser said.

Others think there's a problem with our calculations of the cepheid ladder or our observations of the CMB. Lombriser said his explanation, which others have proposed before but his paper fleshes out in detail, falls more into this category.

"If the less complex standard physics can explain the tension, this provides both a simpler explanation and is a success for the known physics, but it is unfortunately also more boring," he added.